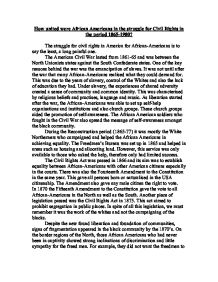 How united were African Americans in the struggle for Civil Rights in the period 1865-1980?

How united were African Americans in the struggle for Civil Rights in the period 1865-1980? The struggle for civil rights in America for African-Americans is to say the least, a long painful one. The American Civil War lasted from 1861-65 and was between the North Unionists states against the South Confederate states. One of the key reasons behind the war was the emancipation of slaves. It was not until after the war that many African-Americans realised what they could demand for. This was due to the years of slavery, control of the Whites and also the lack of education they had. Under slavery, the experiences of shared adversity created a sense of community and common identity. This was characterised by religious beliefs and practises, language and music. As liberation started after the war, the African-Americans was able to set up self-help organisations and institutions and also church groups. These church groups aided the promotion of self-awareness. The African American soldiers who fought in the Civil War also spread the message of self-awareness amongst the black community. During the Reconstruction period (1865-77) it was mostly the White Northerners who campaigned and helped the African Americans in achieving equality. ...read more.

Self-awareness also questioned the standard of living of blacks- 9 out of 10 Southern blacks lived in poverty in 1910. This suffering was reflected in the works of artists and writers in the Harlem Renaissance during the 1920's. Even though their inspiration came from suffering, they were still able to form a type of unity by connecting with the masses and understood their difficulties. During the 1920's the Jazz Age started as well. This was a spread of black music throughout America. Even though this cultural explosion did not affect civil rights, it did project a positive image of African-Americans to na�ve whites as it showed that they could be their equals, even though it was just performing. Another example of self awareness came from the returning 360 000 black soldiers who had fought in Europe, in the First World War and saw the injustice of their own homeland. During the 1920's there was hardly any advancement in civil rights. In the beginning of this decade the philosophy of Marcus Garvey 'black is beautiful' spread rapidly. It glorified African roots and emphasised on being proud in being a black person. It was done through the expanding black press, such as Blackstar. ...read more.

The Black Muslim community taught its followers that all whites were devils. Other more militant organisations started as well, such as the Black Panthers in 1966. The main rift in the unity of African-Americans emerged when the Muslim leader Malcolm X started to preach to thousands on the ideology of 'Black Power'. At this crucial stage of civil rights, there were two opposing sides, which therefore led to nothing being achieved through legislation. There is not a measurement of how unified African-Americans were in their struggle for civil rights as African-Americans went through periods of unity and disunity. During the periods of disunity little was achieved as opposing leaders or organisations were confused over what was to be done. In the early years of the period 1865-1980, more was achieved due to the actions of the more liberal whites. Self-awareness then aided the process and informed many African-Americans on what could be achieved and what should be achieved. The civil rights movement during the latter of this period seemed to take on a faster pace this was because African-Americans were now aware and also the message was spread through press and television. Influential leaders were no longer scared to express their views and were prepared to take action. This physical action included events such as the bus boycott and the March on Washington, involved thousands and therefore shows unity within the black community. ...read more.