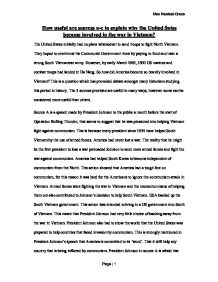 How useful are sources a-c to explain why the United Sates became involved in the war in Vietnam?

How useful are sources a-c to explain why the United Sates became involved in the war in Vietnam? The United States initially had no plans whatsoever to send troops to fight North Vietnam. They hoped to overthrow the Communist Government there by paying to fund and train a strong South Vietnamese army. However, by early March 1965, 3500 US marines and combat troops had landed in Da Nang. So how did America become so heavily involved in Vietnam? This is a question which has provoked debate amongst many historians studying this period in history. The 3 sources provided are useful in many ways, however some can be considered more useful than others. Source A is a speech made by President Johnson to the public a month before the start of Operation Rolling Thunder, that seems to suggest that he was pressured into helping Vietnam fight against communism. This is because every president since 1954 have helped South Vietnam by the use of armed forces. America had never lost a war. The reality that he might be the first president to lose a war persuaded Johnson to send more armed forces and fight the war against communism. America had helped South Korea to become independent of communism from the North. This action showed that America had a tough line on communism, for this reason it was hard for the Americans to ignore the communism attack in Vietnam. ...read more.

The Vietcong were continuously murdering top officials in the south as they intensified their campaign for an independent communist Vietnam. Source C is an extract from an interview with Professor Noam Chomsky who was an American journalist and highly critical of the war. He was also very critical of the US government, which adds to the limitations and the usefulness of the source. The interview was held in October 1982, around 10 years after the war had finished. Unlike the two previous sources, Chomsky is looking at the War in Hindsight, which could possibly distort his view on the USA's involvement after knowing the terrible atrocities that were caused making the source both useful and limited. Noam Chomsky argues that America's involvement in the war is misinterpreted this is evident in an interview in October 1982. It is thought that America fought against the North of Vietnam; however he suggests that America actually attacked the South Vietnam destroying the farming and peasant society. In the source the professor implicates strongly that the United States of America moved into Vietnam because it feared of an independent South Vietnam. Noam Chomsky also suggests that America dreaded the thought of South Vietnam reforming and improving its economy. He firmly believes that this procedure would undermine the American influence in the area. ...read more.

Because Chomsky is looking back in hindsight it makes the source limited and 'its official truth now' meaning that he is sympathising with the US public as they all were now aware of the Vietnam true nature of the war. In conclusion all the sources suggest reason such as the domino effect and the spread of communism. Each source is useful and limited, but out of all the sources, source B is the most useful. Source A is the official reason for why the USA became involved and was taken the election year and therefore would contain limitations in order to please the American public and win the election. Source B on the other hand is from the same election year but is the unofficial reasons. The source is taken from a private conversation and underlines the pressures Johnson had to face, from the president himself. Source C is also limited because it is taken after the war and could be argued that Chomsky was highly influenced by his knowledge. Source B is the most useful to explain why American became involved in the war because it gives the most truthful view from Johnson to why the USA entered Vietnam. Overall, they are all useful but because they have their limitations, it could have been more useful to use another source that was more reliable, such as an independent source that is very balanced and gives us a fair picture. 1391 words ?? ?? ?? ?? Max Nastasi-Grace Page | 1 ...read more.