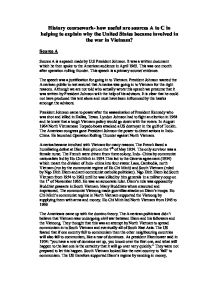 How useful are sources A to C in helping to explain why the United States became involved in the war in Vietnam?

History coursework- how useful are sources A to C in helping to explain why the United States became involved in the war in Vietnam? Source A Source A is a speech made by U.S President Johnson. It was a written document which he then spoke to the American audience in April 1965. This was one month after operation rolling thunder. This speech is a primary source/ evidence. The speech was a justification for going in to Vietnam. President Johnson wanted the American public to rest assured that America was going in to Vietnam for the right reasons. Although we are not told who actually wrote this speech we presume that it was written by President Johnson with the help of his advisors. It is clear that he could not have produced this text alone and must have been influenced by the hawks amongst the advisors. President Johnson came to power after the assassination of President Kennedy who was shot and killed in Dallas, Texas. Lyndon Johnson had to fight an election in 1964 and he knew that a tough Vietnam policy would go down with the voters. In August 1964 North Vietnamese Torpedo boats attacked a US destroyer in the gulf of Tonkin. The American congress gave President Johnson the power to direct actions in Indo-China. He launched Operation Rolling Thunder against North Vietnam. America became involved with Vietnam for many reasons. The French faced a humiliating defeat at Dien Bein phu on the 7th of May 1954. The only survivor was a female nurse. The French were driven from there colony, Indo- China by communist nationalists led by Ho Chi Minh in 1954.This led to the Geneva agreement (1954) which meant the division of Indo- china into four states: Laos, Cambodia, north Vietnam (run by the communist regime of Ho Chi Minh) and South Vietnam (ruled by Ngo Dinh Diem and anti communist catholic politician). ...read more.

Since we do not know who produced the source and why, we cannot be sure of if they have tampered with the source or not and this plays a big part in how reliable the source is. In my opinion the purpose of the source was to let the people of America know about what the President really thought of the situation in Vietnam. The source is an embarrassment to the President as it portrayed his as being weak. In the source it shows that the President himself does not know why he was going into Vietnam and had no understanding of the situation therefore making him an unsuitable president. This source could have been used to bribe the president but I think that it was used as a form of blackmail and obviously posed as a threat to Johnson. Once again although we do not know who produced this source it is highly likely that it was produced by Hawks who thought they would be able to use this and maybe blackmail the president into doing what they thought was right. This source shows that Johnson himself did not know how to deal with the Vietnam situation. The fact was that America had been involved with Vietnam way before Johnson came to power. America had supplied the French forces with $1.2 billion of military aid. However in 1954 the French had been defeated at the battle of Dien Bein Phu and they decided to leave Vietnam. In May 1954, at the Geneva conference it was agreed that elections would take place in two years time meanwhile Vietnam would be divided into two halves North Vietnam and South Vietnam. The elections however did not take place. The United States continued supplying military aid and advisors to South Vietnam. They were protecting South Vietnam from communist guerrillas also known as the National Liberation Front. President Johnson had no choice but to continue on in Vietnam. ...read more.

The Vietnamese people suffered from birth malformations. Also America also used a chemical called 'Agent Blue' to demolish the harvesting of rice. This not only starved the enemy but also the allied farmers too. Between one to two million Vietnamese people died in the Vietnam War. The Vietnam War not only affected Vietnam but America also suffered losses.58, 000 Americans died in the war and there were 350,000 casualties. After the Vietnam War the US was afraid to get involved elsewhere. They did not want another situation similar to the one in Vietnam. It is estimated that more than 3 million Americans at the average age of 19, served in the Vietnam War. The estimated cost of the war $176 billion if you put together the amount spent on Vietnam while Kennedy, Johnson and Nixon where in power. There are some limitations to this source such as the information given in the source is very basic and does not go in to depth therefore we cannot see the source as giving us enough for us to form our own opinions about the American involvement in Vietnam. We would have to do some research aswell as this is a one-sided source and therefore to get an overall view on the topic we would have to look at another point of view. The source does show feelings of disapproval and dislike for the American actions and this comes across through the way America is portrayed in the source. I think that this source was created to compete against the right winged American politicians at that time. In my opinion this source is very useful in helping understand why America entered Vietnam as it pieces together the main reasons such as the American fear of the spread of communism and relates it to the situation in Vietnam. This source also helps us to see the point of view of a left wing American politician who is hind sighting on the Vietnam situation. ?? ?? ?? ?? ...read more.