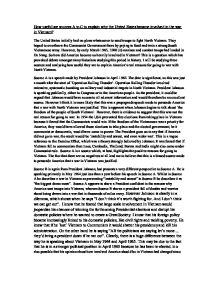 How useful are sources A to C to explain why the United States became involved in the war in Vietnam?

How useful are sources A to C to explain why the United States became involved in the war in Vietnam? The United States initially had no plans whatsoever to send troops to fight North Vietnam. They hoped to overthrow the Communist Government there by paying to fund and train a strong South Vietnamese army. However, by early March 1965, 3500 US marines and combat troops had landed in Da Nang. So how did America become so heavily involved in Vietnam? This is a question which has provoked debate amongst many historians studying this period in history. I will be studying three sources and analysing how useful they are to explain America's real reasons for going to war with North Vietnam. Source A is a speech made by President Johnson in April 1965. The date is significant, as this was just a month after the start of `Operation Rolling Thunder`. Operation Rolling Thunder involved extensive, systematic bombing on military and industrial targets in North Vietnam. President Johnson is speaking publically, either to Congress or to the American people. As the president, it could be argued that Johnson would have access to all relevant information and would therefore be an excellent source. However I think it is more likely that this was a propaganda speech made to persuade America that a war with North Vietnam was justified. ...read more.

This led to Congress passing the Tonkin Gulf resolution, giving Johnson complete power to take `any necessary action to prevent further aggression and achieve peace and security` . However as President Johnson is speaking privately I think he is more likely to be revealing his personal opinion about Vietnam. It is clear from what he is saying that he doesn't care about the Vietnamese people, but ultimately he fears that if he allows South Vietnam to fall to communism they "may chase you into your own kitchen". This again implies the American's fear of Domino Effect of Communism. We are left with feeling that Johnson is full of doubt about whether it is right for him to take America to war thousands of miles away. We know this when he says "this is a terrible thing we are getting ready to do". Source C is an interview with Noam Chomsky in 1982; nine years after the last American forces had left Vietnam. By the 1980s many people were questioning the importance of the Vietnam War, and began to criticise America's involvement. Many would have been interested in what Chomsky had to say as he had been openly critical of America's involvement during the war. Chomsky, a life-long anarchist, sympathised with communism and had previously written books about the possible benefits of a Communist government. ...read more.

The President talks about the war with almost religious zeal, by quoting from the Bible. He perhaps provides false reasons as to why he has decided to go to war so that America not only accepts a full scale war, but supports one. It could be argued that Source B is a more reliable account of Johnson's real reason for becoming so involved in Vietnam. It at least gives us Johnsons accurate opinion which contradicts Source A, allowing us to discredit Source A further. It reflects the real dilemma Johnson faced and that it was not just a case of fighting for the freedom of the people of South Vietnam. In source C, Noam Chomsky delivers a critical view of America's involvement in Vietnam. He questions the "official" reasons given for the US going to war in Vietnam. However whilst there is evidence to suggest that Chomsky could be accurate in his views, we know that he has always been against US foreign policy. Unlike Source A, Sources B and C are successful in presenting valid reasons why America should not have gone to war or at least their real motives in doing so. Source A on the other hand provides a smoke screen as to the real reasons America became involved in Vietnam. This is useful to a historian as it tells us about propaganda around this period. ...read more.