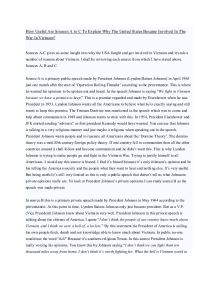 How Useful Are Sources A to C To Explain Why The United States Became Involved In The War In Vietnam?

How Useful Are Sources A to C To Explain Why The United States Became Involved In The War In Vietnam? Sources A-C gives us some insight into why the USA fought and got involved in Vietnam and reveals a number of reasons about Vietnam. I shall be reviewing each source from which I have stated above. Sources A, B and C. Source A is a primary public speech made by President Johnson (Lyndon Baines Johnson) in April 1965 just one month after the start of 'Operation Rolling Thunder' according to the provenance. This is where he wanted his opinions to be spoken out and heard. In the speech Johnson is saying "We fight in Vietnam because we have a promise to keep". This is a promise regarded and made by Eisenhower when he was President in 1953. Lyndon Johnson wants all the Americans to believe what he is exactly saying and still wants to keep this promise. The Truman Doctrine was mentioned in the speech which was to come and help about communism in 1948 and Johnson wants to stick with this. In 1954, President Eisenhower and JFK started sending "advisers" as first president Kennedy would have wanted. You can see that Johnson is talking in a very religious manner and just maybe a religious when speaking out in the speech. ...read more.

It's like Lyndon Johnson isn't really bothered and couldn't care less about his people and about the Vietnam War. Johnson is also suggesting that the USA cannot win. It's showing us that Johnson is scared fear of communism taking over the world and that the political consideration "Let's move on, let's go into the North" are just being selfish. We have to be very careful within this speech, as it hasn't been edited o tampered with. If it's all whole trustworthy. Possibly was it taped? As it has been to believed that since President Johnson been president his office was monitored by everything that had been said by recording. But is this really reliable and exactly what U.S. president Johnson really said. As I have stated before it can be edited in various ways making things sound different from what has actually been said. In source C this is a secondary speech of a modern writer interview with Professor Noam Chomsky, an American critic of the war in October 1982 according to the provenance underneath the extract. It's talking about how the USA went to war for political reasons which were to dominate Vietnam. Also to stop South Vietnam about independence. ...read more.

The 'world order' cold was U.S.A think they are democratic and can stop communism. President Johnson when speaking out is saying in other words that we "must" stay in Southeast Asia just like we stayed and did in Europe. In source B this is supposed to be a private and confidential conversation which took place in May 1964 according to the provenance with U.S. President Johnson. Johnson has stated that the U.S. are thick and that they're dumb and not knowledge able to know much about the Vietnam War. "h**l of a lot less". This word/phrase is never spoken out in public. Because it's southern religious Texan and no one ever says the word 'h**l' out at all in public. Nearly all the politicians are saying "Let's move, let's go into the North. Most of the politicians' are selfish and un-considerate. Johnson is saying "I don't think we can fight them then thousand miles away from home. I don't think it's worth fighting for." Johnson also spoke out "This is a terrible thing we are getting ready to do". That it's the fear of communism taking over. But not just taking over the country, by taking over the world. Johnson forgets that in his office anything that is being said is always being taped, no matter what. But is this really reliable and exactly what U.S. president Johnson really said. As this can be edited in many various ways. ...read more.