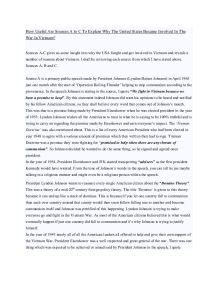 How Useful Are Sources A to C To Explain Why The United States Became Involved In The War In Vietnam?

How Useful Are Sources A to C To Explain Why The United States Became Involved In The War In Vietnam? Sources A-C gives us some insight into why the USA fought and got involved in Vietnam and reveals a number of reasons about Vietnam. I shall be reviewing each source from which I have stated above. Sources A, B and C. Source A is a primary public speech made by President Johnson (Lyndon Baines Johnson) in April 1965 just one month after the start of 'Operation Rolling Thunder' helping to stop communism according to the provenance. In the speech Johnson is stating in the source, I quote "We fight in Vietnam because we have a promise to keep". By this statement indeed Johnson did want his opinions to be heard and notified by his fellow American citizens, so they shall believe every word that comes out of Johnson's mouth. This was due to a promise being made by President Eisenhower when he was elected president in the year of 1953. Lyndon Johnson wishes all the Americans to trust in what he is saying to be 100% truthful and is trying to carry on regarding the promise made by Eisenhower and earn everyone's respect. The 'Truman Doctrine' was also mentioned about. This is a list of every American President who had been elected in year 1948 to agree with a various amount of promises which they written then had to sign. ...read more.

Johnson implied, I quote "to leave Vietnam to its fate would shake the value of an American commitment and in the value of America's word. The result would be instability and unrest, and even wider war". I could say this source is being very biased, due to because Johnson is only giving his own opinion on what the American citizens want to hear, whilst he is keeping his real thoughts inside and not expressing his personal opinions. The source can be seen quite useful, but has limitations, as I have stated, it's a public speech where Johnson isn't really voicing his truths about what he thinks of Vietnam. To look at Johnson's person views, then I can begin to study source B. Source B is a private primary speech made by President Johnson in May 1964 according to the provenance. At this point in time, Lyndon Baines Johnson was only just elected president. With Johnson being V.P. (Vice President) he knew a lot regarding Vietnam and knew how everything worked. Lyndon Johnson became the thirty-seventh Vice President in the years from and to 1963-1965. Johnson was one of the major leaders of the 'Democratic Party'. Also Lyndon Johnson was the one who were in charge of creating the "Great Society". President Lyndon Baines in this private speech is discussing a number of things which includes criticizing most of his very own American citizens. ...read more.

President Lyndon Baines Johnson really said? As I have stated before it can be edited in various ways making things sound different from what has actually been said, which could make this source a limitation. Source C is a secondary speech of a modern writer interview with Professor Noam Chomsky, an American critic of the war in October 1982 according to the provenance underneath the extract. The interview is talking about political reasons of the U.S.A and how they went to war which was to dominate Vietnam. Also to discontinue South Vietnam from independence and indeed there was an attack on South Vietnam from the U.S.A. Professor Noam Chomsky says, I quote, "The U.S. did not want an independent South Vietnam that was no longer dominated by America. It feared that South Vietnam might be able to reform and improve itself - develop it's economy- and that might work". Chomsky is being biased due to him being an anti-American, and is therefore being biased towards the American country. To sum up the conclusion of sources A-C all have value and limitations. In my view source B is most useful as it's a private speech where Johnson is criticizing most of his own American citizens by using negative comments and is saying what he really thinks about Vietnam along with the citizens plus America. Once this private speech with Johnson's personal opinions and views about Vietnam, the tape was then exposed to everyone. Therefore source B is definitely the most useful out of them all. By Jordan Alexander Riley ...read more.