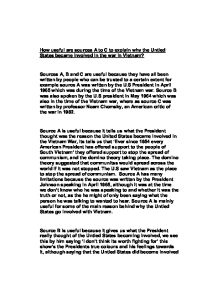 How useful are Sources A to C to explain why the United States became involved in the war in Vietnam?

How useful are sources A to C to explain why the Untied States became involved in the war in Vietnam? Sources A, B and C are useful because they have all been written by people who can be trusted to a certain extent for example source A was written by the U.S President in April 1965 which was during the time of the Vietnam war. Source B was also spoken by the U.S president in May 1964 which was also in the time of the Vietnam war, where as source C was written by professor Noam Chomsky, an American critic of the war in 1982. ...read more.

Source A is mainly useful for some of the main reason behind why the Untied States go involved with Vietnam. Source B is useful because it gives us what the President really thought of the Untied States becoming involved, we see this by him saying 'I don't think its worth fighting for' this show's the Presidents true colours and his feelings towards it, although saying that the Untied States did become involved in the War, this brings up another question as to who he was talking to in this private conversation and who herd it was he speaking from the heart or not? ...read more.

Source C has many limitations because the source was written by Professor Noam Chomsky an American critic of the war in 1982, now because it was written in 1982 they had access to more information which means a clearer view to it. Source C is mainly useful for its more clearer view of the war and its more educational view of it. In conclusion Sources A, B and C are very useful in understanding why the Untied States became involved in the War in Vieggtnam, the most useful is probably Source B as it gives good clear reasons in why the United States got involved in the War, and its source of content is also ...read more.