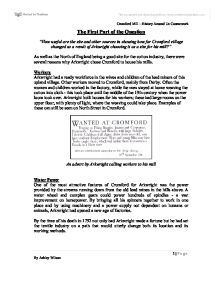 The First Part of the Question "How useful are the site and other sources in showing how far Cromford village changed as a result of Arkwright choosing it as a site for his mill?" As well as the North of England being a good site for the cotton industry, there were several reasons why Arkwright chose Cromford to house his mills. Workers Arkwright had a ready workforce in the wives and children of the lead miners of this upland village. Other workers moved to Cromford, mainly from Derby. Often the women and children worked in the factory, while the men stayed at home weaving the cotton into cloth - this took place until the middle of the 19th century when the power loom took over. Arkwright built houses for his workers; these had large rooms on the upper floor, with plenty of light, where the weaving could take place. Examples of these can still be seen on North Street in Cromford. An advert by Arkwright calling workers to his mill Water Power One of the most attractive features of Cromford for Arkwright was the power provided by the streams running down from the old lead mines in the hills above. A water wheel and complex gears could power hundreds of spindles - a vast improvement on horsepower. By bringing all his spinners together to work in one place and by using machinery and a power supply not dependent on humans or animals, Arkwright had opened a new age of factories. ...read more.

These houses were relatively small in size. As expected, these houses were situated relatively close to the mill. (See map at the bottom of page). Each house had an allotment and a pig sty. Other facilities Amongst housing for the workers and citizens, Arkwright created a market outside the hotel for the village people. Arkwright educated Cromford's citizen's children with lessons in Sunday school, in the Church which he built, and is also still in use today. Richard Arkwright did not actually build a school (his son did this). He made invitations to families to come live and work in Cromford, which increased the size of the town greatly. A photograph of the 'Greyhound Hotel' built in 1778 Arkwright built many pubs, including "The Boat Inn" in 1772. This was originally the "Cap in Hand" as when workers came to this building to collect wages in their caps. He also built the Greyhound Hotel in 1778 (which is still very popular today) with the intention from Arkwright of entertaining nobles who came to inspect the mills. The Second Part of the Question How useful are the site and other sources in showing what changes were made in the mill site during the period 1771 to 1800? The First Mill The first mill was built at Cromford in 1771. Contemporary pictures seem to suggest that it had five floors; it was made from grit stone and was well lit by windows. In the mid 1 780s it was expended and the join is still visible today. ...read more.

This gives the impression that the men it housed may have been called to arms to defend the mill in case of attackers, for example the Luddites. Mill Manager's House Beyond the aqueduct stands an urbane, three-storey, 3-bay building. Its iron railings and lamp holder, together with the nearby limestone sett paving and cannon-pattern cast iron stoop, gives texture, interest and counterpoint to the plain cliff-like walls of the mill. Overlooking the entrance to the mill yard it provided added security to the site. Warehouse Building This large stone building of 5 storeys is believed to have functioned as a mill with powered machinery on the four upper floors. On the ground floor, there was a storage area at the end of the building nearest the gate associated with receiving and opening bales of cotton. The cotton was cleaned in a sealed working area inside the large doors towards the middle of the building. A space with an underdrawn ceiling, doorway to the road and enlarged windows would seem to have been an office. Aqueduct The aqueduct in its present form, with a cast iron trough resting on stone piers, replaced an earlier structure which is known to have had a timber launder. The aqueduct carried water from the Cromford Sough to power the first mill. Conclusion I believe that now I can conclude how useful the sources were in explaining the changes that were made to the site during the period 1771 to 1800. In my opinion, I believe that both the sources, the guide tour of the mill, informational notes and videos of Cromford were epically useful in explaining the changes that were made to the mill site. ...read more.