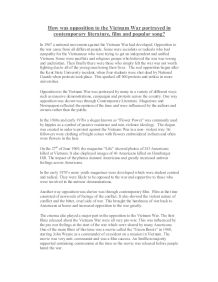 How was opposition to the Vietnam War portrayed in contemporary literature, film and popular song? In 1967 a national movement against the Vietnam War had developed. Opposition to the war came from all different people. Some were socialists or radicals who had sympathy for the Vietnamese who were trying to get an independent and unified Vietnam. Some were pacifists and religious groups who believed the war was wrong and unchristian. Then finally there were those who simply felt the war was not worth fighting due to all of the young men losing their lives. The real opposition began after the Kent State University incident, when four students were shot dead by National Guards when protests took place. This sparked off 400 protests and strikes in more universities. Opposition to the Vietnam War was portrayed by many in a variety of different ways such as massive demonstrations, campaigns and protests across the country. One way opposition was shown was through Contemporary Literature. Magazines and Newspapers reflected the opinion of the time and were influenced by the authors and owners rather than the public. In the 1960s and early 1970s a slogan known as "Flower Power" was commonly used by hippies as a symbol of passive resistance and non-violence ideology. ...read more.

A comedy TV show called "MASH" based on the film was released in 1972. Like the movie it was a Dark comedy which was antiwar and displayed the harshness of the Vietnam War. In 1968 a documentary called, "The Year of the Pig" was released. This documentary composed archived footage and interties. It showed solider legless and b****y, being carried off the battle field. The song "Old Glory" played in the background throughout the documentary. The documentary was strongly antiwar however most film producers didn't want antiwar material. There was also many images which seem to have the same or even more of an effect on the antiwar views of America. An example was the image of Napalm victims. The image displayed several children running from napalm attack. The children can be seen crying as their flesh is burning due to the napalm. The main focus in the picture is a naked girl running with her arms out crying. What can't be seen in the picture is that her back is completely burnt due to napalm. The picture helps to depict the bitterness and cruelty of war. The fact the girl is naked, burnt and hasn't anyone with her to look after her builds up how unmerciful war is. ...read more.

While I wear a heartache since he left me for you" Another example would be Perry Friedman who released the song "I Don't Stand Alone" in 1968. The song told the public to not fight in Vietnam and that those who do not fight are not alone. It displays the American's role in the War as being evil and inhumane and is an extremely antiwar song. This helped the opposition to the war increase. The opposition to the Vietnam War was not displayed through violence, but rather song, film and literature. All methods played an equal part in increasing antiwar awareness and encouraged the public to be more opposed of the Vietnam War. They were a major contribution to the opposition and displayed how the public felt. Without them there may have been a lot less numbers fighting to stop the Vietnam War and people opposing it may not have felt as strong and brave. A lot of the methods brought truth to the public and opened their eyes to what is really going on in war. It was mostly the truth that shocked the Americans and brought them to opposing the war. The power of the media to this present day sees people to government. ...read more.