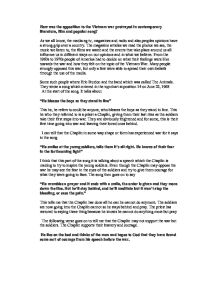 How was the opposition to the Vietnam war protrayed in contemporary literature, film and popular song?

How was the opposition to the Vietnam war protrayed in contemporary literature, film and popular song? As we all know, the media eg tv, magazines and radio and also peoples opinions have a strong grip over a country. The magazine articles we read the photos we see, the music we listen to, the films we watch and the events that take place around us all influence us in different ways on our opinions and in what we believe. From the 1960s to 1970s people of America had to decide on what their feelings were like towards the war and how they felt on the topic of the Vietnam War. Many people strongly opposed this war, but only a few were able to spread their own beliefs through the use of the media. Some such people where Eric Burdon and the band which was called The Animals. They wrote a song which entered in the top chart at position 14 on June 22, 1968 At the start of the song. It talks about. "He blesses the boys as they stand in line" This he, he refers to could be anyone, who blesses the boys as they stand in line. ...read more.

Another song which also highlights the opposition towards the war in Vietnam War was a song called Goodnight Saigon by Billy Joel. This song also shows the perspective of the soldiers. The fear which, is faced by the soldiers are showing in the song. "Prayed to Jesus Christ with all their might." They knew at any minute, hour or day they knew they faced the fate of death but with this mind they had to remain brave. The lyrics "And who was wrong? And who was right?" Makes reference to the futility, the uselessness of the people dieing due to the war. This makes the loss of life more heartbreaking and tragic. They don't even know why they are fighting and what for. The song also tells us how the attitudes of the soldiers have changed towards the war. "Camera's to shoot the landscape." This tell me as the reader that their minds. The minds of the soldiers have changed to suit their surroundings. The surroundings consist of violence, devastation and destruction. As well as the violent surroundings and form of mind the language they use is violent. Because it says, "And we were sharp as knives," This shows that the soldiers as people have change during the war. ...read more.

There was also newspapers which expressed their opinions for example "life" even though most newspapers were conservative this one was different. It was introduced in 1969 to the public, the contents where shocking it stunned everyone into antiwar protest. Even though it was an anti war magazine it didn't force it readers to be antiwar but give them a choice. This magazine did accomplish one thing and that was swaying the opinions of most of the American civilians. They managed this by showing pictures of up to 250 young men who had been killed during the Vietnam War. This was upsetting to the American public. So overall the Vietnam War faced massive opposition from any kind of people. Some people wrote poems others songs and films but whether they wrote a song, poem or film they all thought the same about the war. They wrote whatever they wrote to show their anger. The Vietnam War itself was portrayed as pointless resulting in millions losing their lives. Still today many people suffer from the war some suffer mentally with flashbacks, not being able to sleep at night and not able to live their life or they could suffer physical such as scars. All resulting from the Vietnam War. ...read more.