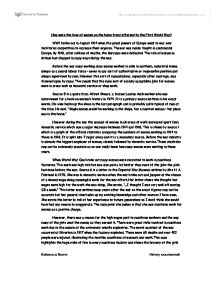 How were the lives of women on the home front affected by WW1?

How were the lives of women on the home front affected by the First World War? WW1 broke out in August 1914 when the great powers of Europe went to war over territorial competition to increase their empires. The war was mainly fought in continental Europe. By 1918, after millions of deaths, the Germans were defeated. The role of women in Britain had changed in many ways during the war. Before the war many working class women worked in mills in northern, industrial towns, always as a menial labour force - never in any sort of authoritative or responsible position and always supervised by men. However this sort of manual labour, especially after marriage, was frowned upon by many. This meant that the main sort of socially acceptable jobs for women were in areas such as domestic service or shop work. Source 5 is a quote from Alfred Shears, a former London dock worker who was interviewed for a book on women's history in 1974. It is a primary source written in his exact words. His view backs up the ideas in the last paragraph and is probably quite typical of men at the time. He said, "Single women would be working in the shops, but a married woman - her place was in the home." However during the war the amount of women in all areas of work increased apart from domestic service which saw a major decrease between 1914 and 1918. ...read more.

The work women were doing in all fields during the war was instrumental to Britain's success at home and on the field of war, and in 1917 this was accepted by the government. Source 9 is a quote from Herbert Asquith, a former British PM, speaking to a public audience in 1917. Before the war he was opposed to women voting. He said, "When the war is over the question will arise about women's role in society. I would find it impossible oppose them getting the vote." This shows that the role of women on the home front changed his mind about whether they were equal members of society. I think that this source reflects the views of many middle/upper class men at the time and backs the changing of views which led up to some women getting the vote in 1917. After the war many women reported feeling more confident and self-reliant though many did not keep their wartime jobs or wages. Source 10 illustrates this. It is a photograph taken in 1920 which shows 3 young women who are smoking and drinking in a restaurant. On the table rests a sign which reads, "Ladies, Please do not smoke." The 2 most important things in this photograph are that the women are without a male chaperone and that they are smoking though they are not supposed to. ...read more.

The fact that this was printed in a popular magazine shows the pressure on independent women at the time. Women who were forced out of work often stayed on the dole rather go into domestic service. In summary, I believe that WW1 changed many aspects of women's lives and that women did affect the outcome of the war. During the war many women were more independent, earned their own money, and felt needed and valued in society. There were problems; some men did not like women working, women were not granted the vote on the same terms as men and at the end of the war a lot of women went back to life as they knew it before 1914. However this was the start of a long process which eventually ended in equal rights for women. Writing about women's history has been very interesting and I have found that there is a wide range of available information and sources about WW1. Apart from the provided sources I have used the internet for background knowledge. The site I found most useful was www.wikipedia.com as it had a range of extensive articles from various sources which helped me to develop my understanding of the context of the war. The thing which I think is missing is more primary sources from working class women as these would have helped me cover a wider range of experiences. ?? ?? ?? ?? Rebecca Rowe History coursework ...read more.