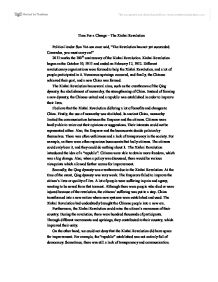 I believe that the Xinhai Revolution did bring a lot of benefits and changes to China. Firstly, the use of monarchy was abolished.

For example, as there were often rapacious bureaucrats that bully citizens. The citizens could only bear it, and they could do nothing about it. The Xinhai Revolution introduced the idea of a "republic". Citizens were able to obtain more freedom, which was a big change. Also, when a policy was discussed, there would be various viewpoints which allowed further rooms for improvement. Secondly, the Qing dynasty was overthrown due to the Xinhai Revolution. At the time of the event, Qing dynasty was very weak. The Emperors failed to improve the citizen's lives or quality of live. A lot of people were suffering in pain and agony, wanting to be saved from that torment. ...read more.

For example, the "republic" established was not entirely full of democracy. Sometimes, there was still a lack of transparency and communication. Also, the government failed to bring absolute peace to China. Soon after the Xinhai Revolution, different policies and restrictions limited China's improvement. Chaos and movements occurred. Until now, China still has different flaws. It is believe that its imperfections were shaped after the Xinhai Revolution, because the government's actions and decisions failed to live up their claims as the foundation was not built strongly. Therefore, different problems arose. In conclusion, the Xinhai Revolution was still one of the most successful revolutions in China, even though it had flaws. It is still a long road to the complete transformation of China, as the goals have not been all achieved yet. However, I believe that day when our revolution succeeds will definitely arrive. ...read more.