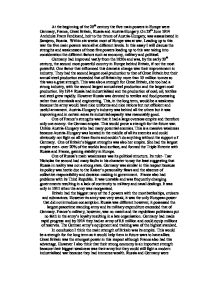 I will discuss the strengths and weaknesses of these five powers leading up to this war taking into consideration the different factors such as economy, military and political.

At the beginning of the 20th century the five main powers in Europe were Germany, France, Great Britain, Russia and Austria-Hungary. On 28th June 1914 Archduke Franz Ferdinand, heir to the throne of Austria-Hungary, was assassinated in Sarajevo, Bosnia. Within six weeks most of Europe was at war. Leading up to this war the five main powers were all at different levels. In this essay I will discuss the strengths and weaknesses of these five powers leading up to this war taking into consideration the different factors such as economy, military and political. Germany had improved vastly from the 1850s and was, by the early 20th century, the second most powerful country in Europe behind Britain, if not the most powerful. One factor that influenced this dramatic change was their improvement in industry. They had the second largest coal production to that of Great Britain but their annual steel production exceeded that of Britain by more than 10 million tonnes so this was a great strength. ...read more.

One of Britain's biggest strengths was also her empire. She had the largest empire ever- over 20% of the worlds land surface, and formed the Triple Entente with Russia and France, gaining stability in Europe. One of Russia's main weaknesses was its political structure. Its ruler- Tsar Nicholas the second had many faults in his character to say the least suggesting that Russia in reality was not a strong state. Germany was similar in this respect because its policy was hectic due to the Kaiser's personality flaws and the absence of collective responsibility and decision-making in government. France also had problems with its Third Republic. It was unstable and was frequently changing governments resulting in a lack of continuity to military and naval dealings. It was only in 1911 when the army was reorganised. Britain had the biggest navy of the 5 powers with the most battleships, cruisers and submarines. ...read more.

Russia and Germany were different however, both their armies were strong but they both had weak rulers who had personality flaws and this proved to be critical when it came to decision making and would cost them. A difference between these two countries however was that Germany had a strong industry and Russia had a weak industry which in the long term would cost dearly because they could not provide the materials needed to fight in a modern war. Although Austria-Hungary was improving it was still the weakest out the five. I think one of the main weaknesses is its enemies. It could not possibly fight all its enemies and would even struggle with the help of Germany. Another important weakness was that there were many ethnic groups within the country resulting in tension. These 5 countries might have shared weaknesses and strengths but overall they were all on different levels. ...read more.