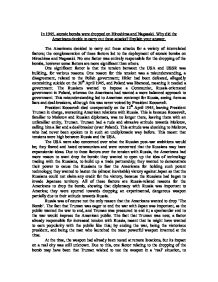 In 1945, atomic bombs were dropped on Hiroshima and Nagasaki. Why did the Americans decide to carry out these attacks? Explain your answer. The Americans decided to carry out these attacks for a variety of interrelated factors; the conglomeration of these factors led to the deployment of atomic bombs on Hiroshima and Nagasaki. No one factor was entirely responsible for the dropping of the bombs, however some factors are more significant than others. One significant factor is that the tension between the USA and USSR was building, for various reasons. One reason for this tension was a misunderstanding, a disagreement, related to the Polish government; Hitler had been defeated, allegedly committing suicide on the 30th April 1945, and Poland was liberated, meaning it needed a government. The Russians wanted to impose a Communist, Russia-orientated government in Poland, whereas the Americans had wanted a more balanced approach to government. This misunderstanding led to American contempt for Russia, seeing them as liars and deal-breakers, although this was never voiced by President Roosevelt. President Roosevelt died unexpectedly on the 12th April 1945, leaving President Truman in charge, worsening American relations with Russia. This is because Roosevelt, familiar to Molotov and Russian diplomats, was no longer there, leaving them with an unfamiliar entity, Truman. ...read more.

Another alternative would be to land US troops in Japan, and assault it in the 'normal' method. This was discarded, because of the experiences of the Marines assaulting Japanese-held islands; the battles and landings were horrific, with heavy casualties, and very unpopular with the public. The Americans were not prepared to assault Japan, as it was thought that it would be like the assaults on smaller islands, but on a larger scale and more horrific. The Americans were therefore reluctant to land troops due to the loss of life and timescale involved, so sought an alternative. The Americans had the option of allowing the Japanese to keep their 'Mikado', their Emperor, and allow him to govern under a constitutional monarchy. This approach was not taken, as it was a conditional surrender, whereas the American public had already been promised (in speeches) unconditional surrender, and conditional surrender had failed in the past: Versailles. The failure of the Treaty of Versailles led many to believe that conditional surrender was weak and did not work. Also, 'The Bomb' was again preferable for other reasons stated. The Americans needn't have dropped the bomb if they had encouraged Russia to invade Manchuria, in aid of China, and cut off more of Japan's war resources and convince them it was hopeless. ...read more.

The island campaign by the USA would have been more successful if the Japanese weren't fighting to the last, shortening the time taken to get to Japan, and a landing would be less unattractive had so many Americans not been killed on the islands by Japanese fanatics. This would also make the war less unpopular with the public, so there would be less pressure from there. This factor of Japanese fanaticism is clearly vastly important, as had the Japanese been in the same frame of mind as the Americans, the war would almost certainly have been swifter. These factors are the main reasons for the dropping of the atomic bomb, both directly and indirectly, and in the absence of these factors it is likely that the bomb would never have been dropped. The alternatives, considered but not tried by the Americans, would have a chance of success. The fact that they were all-too-eager to drop the atomic bomb was due to their political situation with Russia more than their military situation with Japan. Had Japan not been so fanatical, this 'excuse' for the bomb would not have come up. In the absence of these two factors, or even one of them, the atomic bombs would not have been dropped; therefore they are the most important factors. ...read more.