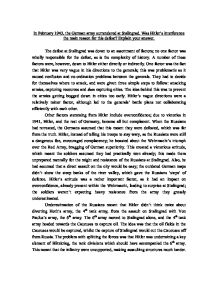 In February 1943, the German army surrendered at Stalingrad. Was Hitler's interference the main reason for this defeat? Explain your answer.

In February 1943, the German army surrendered at Stalingrad. Was Hitler's interference the main reason for this defeat? Explain your answer. The defeat at Stalingrad was down to an assortment of factors; no one factor was wholly responsible for the defeat, as is the complexity of history. A number of these factors were, however, down to Hitler either directly or indirectly. One factor was the fact that Hitler was very vague in his directions to the generals; this was problematic as it caused confusion and co-ordination problems between the generals. They had to decide for themselves where to attack, and were given three simple steps to follow: attacking armies, capturing resources and then capturing cities. The idea behind this was to prevent the armies getting bogged down in cities too early. Hitler's vague directions were a relatively minor factor, although led to the generals' battle plans not collaborating efficiently with each other. Other factors stemming from Hitler include overconfidence; due to victories in 1941, Hitler, and the rest of Germany, became all but complacent. When the Russians had retreated, the Germans assumed that this meant they were defeated, which was far from the truth. Hitler, instead of telling his troops to stay wary, as the Russians were still a dangerous foe, encouraged complacency; he boasted about the Wehrmacht's triumph over the Red Army, bragging of German superiority. This created a victorious attitude, which meant the soldiers assumed they had practically won already; this made them unprepared mentally for the might and resistance of the Russians at Stalingrad. Also, he had assumed that a direct assault on the city would be easy; the outdated German maps didn't show the steep banks of the river valley, which gave the Russians 'steps' of defence. Hitler's attitude was a rather important factor, as it had an impact on overconfidence, already present within the Wehrmacht, leading to surprise at Stalingrad; the soldiers weren't expecting heavy resistance from the army they grossly underestimated. ...read more.

To further cut down German supply lines, Russian troops forced the German line back, which at certain points was defended by German allies; these were weaker and an easier target for Russian forces. This weakness in the line can be partially attributed to Hitler, however he didn't really have any choice; the line was overstretched and he had no other available troops with which to hold it. Due to weaknesses in this broad front, the line was pushed back, leaving German-controlled airfields further away; the Luftwaffe planes could carry even fewer supplies to the 6th army, making the situation worse, as Zhukov had intended. This factor is important, as Zhukov was able to seize the initiative, isolating Von Paulus and reducing the amount supplies the Luftwaffe could provide by increasing the distance between the airfields and the army. Armies in Russia were far more used to fighting in their country and, more importantly, were fighting for their country. The Germans were fighting a war to gain Lebensraum, living space, for Germany but weren't passionate about it; the Russians were fighting to defend their own homeland; they knew if they lost the war, they would lose everything to the Germans. This patriotism meant that many Russians were prepared to fight to the last; 40 Russians were able to hold the Grain Elevator against the Wehrmacht for 6 days before it finally fell. This patriotism also led to Russian partisan groups forming behind the German supplies, using guerrilla style tactics. They were able to disrupt German communications, supplies and logistics; small groups of German troops from the front had to be recalled to attempt to deal with them. Overall, patriotism was a key factor in Russian success; the Russians fought ardently against the Germans, with partisans behind the lines using guerrilla warfare to disrupt the Germans. The Germans were inept at urban warfare, house-to-house fighting, in comparison with the Russians who were adept it at. ...read more.

This was very demoralising, and led eventually to Von Paulus's surrender. This situation (opportunity for Zhukov), however, only arose due to a combination of various factors. The Russian patriotism was a major factor, as it meant that the Russians would fight to the last, and that dedicated groups of partisans disrupted the Germans behind the lines. The Russian scorched earth policy was also significant, as it created a need for more German supplies, and the German army was demoralised as the situation was not as planned; they were trained to 'live off the land'. The fact that the Russians were proficient at urban warfare meant that they held the advantage in the city itself, even when they couldn't march German numbers Hitler's interference led to many factors, as outlined above. The view can be taken that winter was the most important factor, as it causes and contributes to many other factors, though personally I feel Hitler's interference may have caused winter to become a factor; if his war in Yugoslavia hadn't taken place, and if he had tried to speed the war up, he may have secured a line east of the Caucuses before winter. His failure to recognise the danger of the approaching winter was very important, as he had not equipped his troops for the winter. Of course, due to the complexity of events, Stalingrad was not lost by one factor; it was a mixture of factors causing defeat; in my opinion, Hitler's interference was the most important one, as it caused many other important factors. There are different views about the past due to this complexity, and a certain bias is involved; at the time the Germans were passing off the defeat as nothing more than a sequence of unfortunate consequences, whereas the Russians were proclaiming the bravery of their soldiers. It is hard to gain an accurate, unbiased account of the past; however, in my opinion, based on all available evidence, the main reason for defeat at Stalingrad was Hitler's interference, both direct and indirect. ...read more.