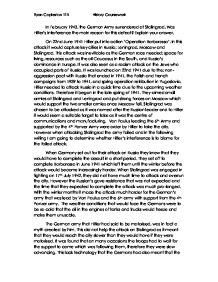 In February 1943, the German Army surrendered at Stalingrad, Was Hitlers interference the main reason for this defeat? Explain your answer.

In February 1943, the German Army surrendered at Stalingrad, Was Hitler's interference the main reason for this defeat? Explain your answer. On 22nd June 1941 Hitler put into action 'Operation Barbarossa'. In this attack it would capture key cities in Russia; Leningrad, Moscow and Stalingrad. This attack was inevitable as the German race needed; space for living, resources such as the oil Caucasus in the South, and Russia's dominance in Europe. It was also seen as a racism attack on the Jews who occupied parts of Russia. It was launched on 22nd 1941 due to the; non-aggression pact with Russia that ended in 1941, the Polish and French campaigns from 1939 to 1941, and spring operation retribution in Yugoslavia. Hitler needed to attack Russia in a quick time due to the upcoming weather conditions. Therefore it began in the late spring of 1941. They aimed small armies at Stalingrad and Leningrad and put strong forces on Moscow which would support the two smaller armies once Moscow fell. Stalingrad was chosen to be attacked as it was named after the Russian leader and to Hitler it would seem a suitable target to take as it was the centre of communications and manufacturing. Von Paulus leading the 6th Army and supported by the 4th Panzer Army were order by Hitler to take the city. ...read more.

When looking at the failings of Stalingrad it is not possible to blame the German army and Hitler, entirely. This is because the Russians put up a tremendous effort to defend the city. The first positive aspect that the Soviets had against the Germans is that the Russians were better at fighting house to house than the Germans. The Germans had not encountered this type of fighting before so therefore the Russians had an advantage over the Germans. Another reason why the Russians put up such a good fight is that they had no where to retreat to once the Germans pushed them back to Stalingrad. The Vulgar sat behind them so therefore there was no option of retreat. An additional reason for their hard fighting is that they were patriotic about the city and didn't want to loose it to Germans. The Russians did not mind loosing ground at the borders as their country is so vast, but as soon as they begin to attack the central cities and important location it is then when they put up a fight. The soviets battle planning was also of a very high standard. The soviets only put into the city enough troops to keep the Germans occupied. ...read more.

This was caused by the wrong way in which Hitler went about defeating Russia, by taking the Oil Caucuses first then the city. If it was played out in a different order, maybe the city would have been able to be taken if Hitler put more focus on the city, but it is because the German army was complacent that they didn't think they needed that amount of force. Therefore I can see that all the reasons are of different importance but many of them have a knock on effect to others, which in the end turns the attack on Stalingrad to be a failure. Blaming Hitler is not as easy as it seems as the Russians defended the city with great force and Hitler did not expect this. But Hitler can be blamed for some ridiculous decision such as not allowing Von Paulus to retreat or surrender, but the position in which they were left in made the failure inevitable. To conclude I believe that it was a combined effort of all factors that lead to the failure but all factors bare different importance and it is Hitler's decisions I feel that have the most significance to the defeat as if he had planned the attack out from the beginning with better strategies then maybe the attack would have been successful. ?? ?? ?? ?? Ryan Copleston 11B History Coursework ...read more.