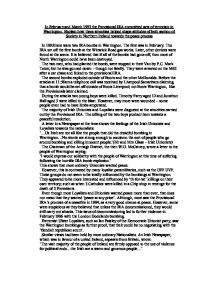 In February and March 1993 the Provisional IRA committed acts of terrorism in Warrington. Explain how these atrocities helped shape attitudes of both section of Society in Northern Ireland towards the peace process

In February and March 1993 the Provisional IRA committed acts of terrorism in Warrington. Explain how these atrocities helped shape attitudes of both section of Society in Northern Ireland towards the peace process In 1993there were two IRA bombs in Warrington. The first was in February. The IRA set off the first b**b at the Winwick Road gas works. Later, other devices were found at the scene. It is believed that if all of the bombs had gone off, then most of North Warrington could have been destroyed. The two men, who had planted the b**b, were stopped in their Van by P.C. Mark Toker, but he was gunned-down - though not fatally. They were arrested on the M62 after a car chase and linked to the provisional IRA. The second bombs exploded outside of Boots and the other McDonalds. Before the attacks at 11:58am a telephone call was received by Liverpool Samaritans claiming that a b**b would be set off outside of Boots Liverpool; not Boots Warrington, like the Provisionals later claimed. ...read more.

These groups do not seem to be totally influenced by the bombings at Warrington. They appeared to be more interested and influenced by 't*t-for-tat' killings on their own territory; such as when 3 Catholics were killed in a Chip shop in revenge for the death of 2 Protestants. Even though most Loyalists and Unionists wanted peace more than ever, that does not mean that they wanted 'peace at any price'. Although, most saw the Provisional IRA's promise of a ceasefire in 1994, as a very good chance at peace. However, some were suspicious as they believed that unless the IRA decommissioned, they would still carry out attacks. This issue of decommissioning led to further violence in February 1996 with the London Docklands bombing. Extremist Ulster Loyalists, such as Ian Paisley of the Democratic Unionist party, saw the Warrington bombings as further proof, that their could be no negotiating with the 'fiendish republican scum'. Similar views had been held by most ordinary Nationalists. An Irish Newspaper, which was in favour of a united Ireland, separate from Britain, wrote: 'The vast majority of the people of Ireland are firmly opposed to the use of violence for political ends...the Irish are a warm and generous people...' ...read more.

some confusion in Britain over your policy to Northern Ireland, and worries that your administration is not as quick to condemn the IRA as it might be. We would be grateful to hear your views and policy on the Northern Ireland question.' brought Gerry Adams to the USA to stop Americans of Irish descent, from donating to NORAID which funded the IRA. By July 1994the Provo's were thinking of achieving peace 'through the ballot box not the bullet.' This led to the Provisional IRA declaring a further ceasefire on 31st August 1994. However, there were still some extremists that were not affected by the Warrington Bombing. These people did not accept a peaceful solution and formed the 'Continuity/Real IRA'. These men were not affected by the murder of the two young boys and carried on bombing. Notable examples of bombings claimed by the 'Real IRA' are the IRA bombing on Arndale, Manchester and the London Docklands. In general the atrocities did help to turn those living in Ulster to peace. Only those extreme individuals, who want nothing but a Unified Ireland or and Ireland governed from Westminster, were unaffected. ...read more.