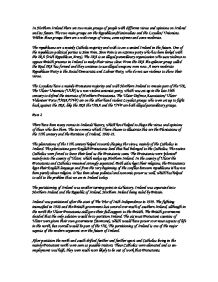 In Northern Ireland there are two main groups of people with different views and opinions on Ireland and its future.

In Northern Ireland there are two main groups of people with different views and opinions on Ireland and its future. The two main groups are the Republican/Nationalists and the Loyalist/ Unionists. Within these groups there are a wide range of views, some extreme and some moderate. The republicans are a mainly Catholic majority and wish to see a united Ireland in the future. One of the republican political parties is Sinn Fein. Sinn Fein is an extreme party who has been linked with the IRA (Irish Republican Army). The IRA is an illegal paramilitary organisation who uses violence to oppose British presence in Ireland to make their views clear. From the IRA the splinter group called the Real IRA has formed and they continue to use illegal weapons even now. A more moderate Republican Party is the Social Democratic and Labour Party, who do not use violence to show their views. The Loyalists have a mainly Protestant majority and wish Northern Ireland to remain part of the UK. The Ulster Unionists (UUP) is a non-violent unionist party, which was set up in the late 19th century to defend the interests of Northern Protestants. The Ulster Defence Association/ Ulster Volunteer Force (UDA/UVF) ...read more.

The Good Friday Agreement was the final product of years of work and attempts for peace since 1972. Some key elements in the Good Friday Agreement were that both British and Irish governments must abide by the wishes of the people in Northern Ireland as to whether or not they were to remain as part of the United Kingdom or to become a united Ireland. A new assembly was also to be set up, consisting of 108 members from all groups- both nationalist and unionist. This assembly would appoint a first and deputy minister. Also, up to ten ministers would be appointed in proportion to the number of seats held by each party in the assembly. Another element in the Good Friday Agreement was to set up a new North/ South Ministerial Council to discuss and take action on matters of mutual interest. Decommissioning of illegal paramilitary weapons was an integral part of the agreement, but an independent commission would monitor the process of decommissioning. The Royal Ulster Constabulary was to be reformed as it was seen as a mainly Protestant force. ...read more.

There is still mistrust among the two sides. They are suspicious of each other's actions and so violence still continues. The decommissioning of weapons has happened in a way, but no weapons have been handed over. The IRA says that their weapons have been "put beyond use" and so therefore they have been "decommissioned ". As there have been no major IRA attacks this dispute has not been dealt with. The releasing of political prisoners has been completed, although now violence in Northern Ireland has started to increased- this maybe due to these released prisoners. The reform of the police force has also been completed, although it has not attracted the amount of Catholics that was hoped for and is still a Protestant majority police force. Another remaining problem is with the assembly. The assembly is not working together as well as planned and so this part of the agreement, although fulfilled is not working as well as hoped. So, the Good Friday Agreement can work if the existing problems are overcome and any new problems that may arise are dealt with quickly and efficiently. Although if problems are left and continue, the Good Friday Agreement will fail and new attempts for peace will have to be worked upon. Top of Form ...read more.