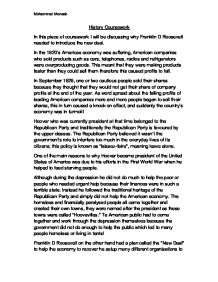 In this piece of coursework I will be discussing why Franklin D Roosevelt needed to introduce the New Deal.

History Coursework In this piece of coursework I will be discussing why Franklin D Roosevelt needed to introduce the new deal. In the 1920's Americas economy was suffering, American companies who sold products such as cars, telephones, radios and refrigerators were overproducing goods. This meant that they were making products faster than they could sell them therefore this caused profits to fall. In September 1929, one or two cautious people sold their shares because they thought that they would not get their share of company profits at the end of the year. As word spread about the falling profits of leading American companies more and more people began to sell their shares, this in turn caused a knock on effect, and suddenly the country's economy was in turmoil! ...read more.

Instead he followed the traditional heritage of the Republican Party and simply did not help the American economy. The homeless and financially paralysed people all came together and created their own towns, they were named after the president as these towns were called "Hoovevilles." Te American public had to come together and work through the depression themselves because the government did not do enough to help the public which led to many people homeless or living in tents! Franklin D Roosevelt on the other hand had a plan called the "New Deal" to help the economy to recover he setup many different organisations to tackle different issues and effects which led or contributed to the depression. ...read more.

Another example is The Economy Act-this cut the pay for anyone working for the government, army, navy, and air force by 15% these tough measures were needed so that money could be reinvested and pumped through the economy. In conclusion Roosevelt felt that he needed to introduce the New Deal due to the fact that America was in a terrible financial crisis, and there was no real immediate action being taken by the current president Hoover and the public were suffering as their financial problems were getting out of hand and were receiving no support from the government. ?? ?? ?? ?? Mohammed Moneeb ...read more.