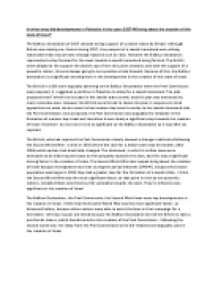 In what ways did developments in Palestine in the years 1917-48 bring about the creation of the state of Israel?

Transfer-Encoding: chunked ﻿In what ways did developments in Palestine in the years 1917-48 bring about the creation of the state of Israel? The Balfour declaration of 1917 showed strong support of a Jewish island by Britain. Although Britain was clearly pro- Zionist during 1917, the prospect of a Jewish homeland was unlikely, nationalist Arabs would have strongly rejected such an idea. However the Balfour declaration represented a step forward for the Jews towards a Jewish homeland being formed. The British were obliged to the support the Jewish cause from this point onwards, and with the support of a powerful nation, this was always going to be a positive stride forward. ...read more.

However the British were forced to shelve the plan in response to Arab opposition but what can be noted is that modern day Israel is similar to the Jewish homeland that the Peel Commission once proposed, the Peel Commission was arguably the template in the formation of modern day Israel and therefore it was clearly a significant step towards the creation of Israel. However I do not see it to be as significant as the Balfour declaration as it was after all, rejected. The British, who had rejected the Peel Commission clearly showed a change in attitudes following the Second World War. ...read more.