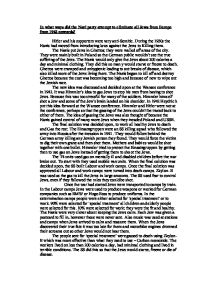 In what ways did the Nazi party attempt to eliminate all Jews from Europe from 1942 onwards?

In what ways did the Nazi party attempt to eliminate all Jews from Europe from 1942 onwards? Hitler and his supporters were very anti-Semitic. During the 1930s the Nazis had moved from introducing laws against the Jews to Killing them. The Nazis put Jews in Ghettos; they were walled off areas of the city. They were mainly built in Poland so the German public wouldn't see the true suffering of the Jews. The Nazis would only give the Jews about 200 calories a day and minimal clothing. They did this so many would starve or freeze to death. Ghettos were cramped and unhygienic leading to out breaks of disease, which also killed more of the Jews living there. The Nazis began to kill off and destroy Ghettos because the cost was becoming too high and because of new to wipe out the Jewish race. The new idea was discussed and decided upon at the Wansee conference in 1942. It was Himmler's idea to gas Jews to stop his men from having to shot Jews. ...read more.

To start with they used mobile van units. When the final solution was decided upon, the SS built Labour and work camps. Once the final solution was approved all Labour and work camps were turned into death camps. Zkylon-B was used as the gas to kill the Jews in large amounts. The SS used fear to control Jews, even if they followed the rules they could be shot. Once the war had started Jews were transported to camps by train. In the Labour camps Jews were used to produce weapons or worked for German companies such as BMW or Hugo Boss to produce uniforms. In the extermination camps people were either selected for 'special treatment' or to work. 90% were selected for 'special treatment' all children and elderly people were selected for this. 10% were selected for work; they were the fit and healthy. The Nazis were very clever about keeping the Jews calm. Each Jew was given a postcard to fill in, however these were never sent. Also music was used at stations and camps when Jews arrived to calm and reassure them. ...read more.

Once the war was coming to an end the SS guards at all camps were given the order to kill all the remaining Jews there. Many took the Jews on death marches. These marches were done especially in 1944 and 1945 because the allies were about to liberate the camps and so the Nazis tried to kill as many Jews as possible and destroy evidence. They did this to hide evidence and move the Jews. Most of the Jews died on these marches, however some guards let their prisoners live, for example at Oscar Schindler's factory. The Nazi's had a very organized way of killing all Jews. Many individuals had roles. Himmler wad in charge of the extermination of all Jews. Heydrich came up with the idea for the final solution. Some people were against the killing of the Jewish race, like Oscar Schindler and they tried to save them. The Nazis main way of killing Jews was gassing at death camps. At Auswitz two thousand people could be gassed in one day, and one million in total. The Nazis had developed the most efficent, horrific killing system of all time, which was able to adapt to their changing fortunes in the war. ...read more.