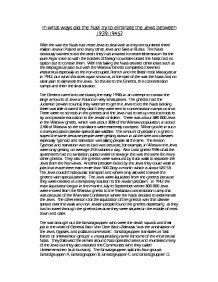 In what ways did the Nazi try to eliminate the Jews between 1939-1945? With the war the Nazis had more Jews to deal with as they encountered three million Jews in Poland and many other Jews and Slavs in Russia. The Nazis obviously wanted to rid the areas they had invaded to create lebensraum for the pure Aryan race so with the borders of foreign countries closed the Nazis had no option but to contain them. With this failing the Nazis created other ideas such as the Madagascar plan but with the Warsaw Ghetto completed it seemed impractical especially as the non-occupied French and the British took Madagascar in 1942, but what this does again show us, at the start of the war the Nazis had no clear plan to eliminate the Jews. So this led to the Ghettos, the concentration camps and then the final solution. The Ghettos came into use during the early 1940s in an attempt to contain the large amounts of Jews in Poland in very small places. The ghettos had the Judenrat (Jewish council) they were set to get the Jews to do the Nazis bidding there was little choice if they didn't they were sent to concentration camps or shot. ...read more.

The war brought out the Einsatzgruppen who were the death squads and their job in the word of General Erich Von Dem Bach-Zelewski 'was the annihilation of the Jews, Gypsies, and political commissars'. Einsatzgruppen translates as 'task forces' or 'intervention groups' a masquerading name for some of the most brutal Nazis. They followed the armies around Nazi operated areas and murdered many of the Jews but they also attacked the Communists who they called Untermenschen (sub humans). The Einsatzgruppen split into four groups Einsatzgruppen A, Einsatzgruppen B, Einsatzgruppen C and Einsatzgruppen D. Einsatzgruppen A operated in the Baltic States of Estonia, Latvia and Lithuania they were considered the most ruthless attempting to kill all the Jews within their area. The other also attempted to wipe out their Jews but only after Einsatzgruppen A. They forced the Jews to dig pits and then shot them in cold blood sometimes the Einsatzgruppen would stripe them of their clothing, some of the people they shot would still be alive yet they would bury them anyway. They also recruited the locals to help with the killing and rounding up of the Jews. ...read more.

The Nazis also made another type of camp called an extermination camp or death camp these camps were usual use for murdering the Jews and other minority groups. They used the gas Zyklon B (this was quite ironic as it had been invented by Fitz Haber, a Jew) as it was a very efficient method of killing. The Nazis found out about the gas because it was originally used as a lice-killing detergent to control typhus in the concentration camps. The gas was tested on Gypsies and then the Nazis used it on Jews. It became the focal killing point of the holocaust. The Nazis led the Jews into the showers where they thought they would get a shower but instead they were gassed. The Nazis first began with an idea to contain the Jews in the ghettos but with more Jews under Nazi control it was no longer a viable solution. The Einsatzgruppen came into effect but they found killing in cold blood a psychological burden, so Heydrich chaired the Wannsee conference to put an end to the Jews through concentration camps and death camps. Stephen Brown 11TR ...read more.