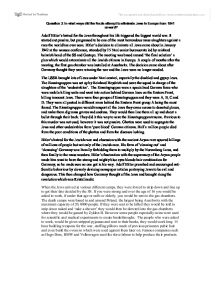 In what ways did the Nazis attempt to eliminate Jews in Europe from 1941 onward?

Adolf Hitler's hatred for the Jews throughout his life triggered the biggest world war. It started out passive, but progressed to be one of the most horrendous mass slaughters against a race the world has ever seen. Hitler's decision to eliminate all Jews came about in January 1942 at the wansee conference, attended by 15 Nazi senior bureaucrats led by reinhard heinrich head of the SS and Gestapo. The meeting was based around 'the final solution' a plan which would exterminate all the Jewish citizens in Europe. A couple of months after the meeting, the first gas chamber was installed at Auschwitz. The decision came about after Germany thought they were winning the war and the Jews were no longer needed. The USSR brought lots of Jews under Nazi control, especially the disabled and gypsy Jews. The Einsatzgruppen was set up by Reinhard Heydrich and were the squad in charge of the slaughters of the 'undesirables'. The Einsatzgruppen were a specialized German force who were mobile killing units and went into action behind German lines on the Eastern Front, killing innocent Jews. ...read more.

Adolf Hitler preached and encouraged anti-Semitic behaviour by cleverly devising newspaper articles portraying Jews to be evil and dangerous. This then changed how Germany thought of the Jews and brought along the revolution which was Kristallnacht. When the Jews arrived at various different camps, they were forced to strip down and line up to get their fate decided by the SS. If you were strong and over the age of 16 you would be asked to work, if under that age or unfit or elderly, you would be sent to the gas chambers. The death camps were based in and around Poland, the largest being Auschwitz with the maximum capacity of 20, 0000 people. If they were sent to be killed they would be told to strip down naked and 'take a shower' they would then be directed into the gas chambers where they would be gassed by Zyklon B. However some people especially twins were used for scientific and medical experiments to create breakthroughs. The people who were asked to work, would be given stripped pyjamas and sent to their bunks, they would work long 15 hour ...read more.

However, at Auschwitz instead of monoxide gas they used zyklon B which was a quicker and more efficient way to exterminate the Jews. From what Rudolf Hoess, the commandant of Auschwitz camp said, it makes it sound like the two camps were rivalry. 'I did not think his methods were very good.' People who lived around the camps and constantly saw trains of people going in but not going out knew what was going on in there, but never said anything in fear of their own lives. Phones were being listened into by the Gestapo and letters were being intercepted. If anyone tried to protest they would be executed. The holocaust resulted in deaths of deaths of millions of people, the most however in Poland, 2,600,000 but all countries around Europe were affected and fought for the holocaust to end. The term 'holocaust' might not be an appropriate name as it means 'death by free will' which the holocaust defiantly wasn't. A more appropriate name would be genocide, as it means the deliberate destruction of a race' ?? ?? ?? ?? Question 3: In what ways did the Nazis attempt to eliminate Jews in Europe from 1941 onward? ...read more.