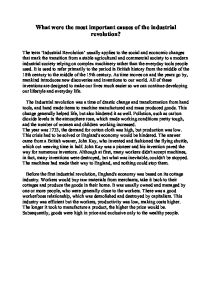 What were the most important causes of the industrial revolution? The term 'Industrial Revolution' usually applies to the social and economic changes that mark the transition from a stable agricultural and commercial society to a modern industrial society relying on complex machinery rather than the everyday tools people used. It is used to refer primarily to the period in British history from the middle of the 18th century to the middle of the 19th century. As time moves on and the years go by, mankind introduces new discoveries and inventions to our world. All of these inventions are designed to make our lives much easier so we can continue developing our lifestyle and everyday life. The Industrial revolution was a time of drastic change and transformation from hand tools, and hand made items to machine manufactured and mass produced goods. This change generally helped life, but also hindered it as well. Pollution, such as carbon dioxide levels in the atmosphere rose, which made working conditions pretty tough, and the number of women and children working increased. The year was 1733, the demand for cotton cloth was high, but production was low. This crisis had to be solved or England's economy would be hindered. The answer came from a British weaver, John Kay, who invented and fashioned the flying shuttle, which cut weaving time in half. ...read more.

Transport was an extreme change in the industrial revolution as it carried goods up and down the country but there were a few problems with some transport because depending on what type of weather, it can delay everything causing immense difficulties for everyone. Transport changed very quickly in the period 1700-1900 as a result of an increased need for better methods of moving goods, new technologies and large scale investment in the countries infra-structure (communications network). The changes came in several stages. First Roads were improved, then Canals were built and finally the Railway was developed. Each change had an impact upon life in the country, each shortened travel times over longer distances and each enabled industrialists to seek new markets in previously out of reach areas of the country. Likewise they enabled more raw materials and goods to be shipped to and from factories, providing further impetus to the industrial age. Improvements in transport is a cause of the Industrial Revolution because without better transport links, Britain would not have been able to trade with Africa and America. Roads were not really suitable for transporting fragile goods along as the roads were always rough and bumpy. Industrialists needed flat and hard wearing roads to enable larger wagons to be able to make use of them safely. Although some roads were improved, many people were very angry that they had to pay money to use roads that had previously been free. ...read more.

The trade triangle was clever because the ships never sailed empty and everyone made lots of money. There were very low labour costs that way so plantation owners became very wealthy and the ship owners who sold slaves made enormous profits. The trade triangle also created a new market for the factory owners in Britain, selling their goods overseas. People making their money from trade would also invest money in new inventions so they would make a bigger profit in the future, benefiting both parties. The British also benefited from the trade triangle as they were supplied with new products such as tea and coffee. New inventions could also be traded so the country prospered. This is a major cause of the Industrial revolution because without it, Britain would not have had as much money to invest in things such as transport and inventions. I think that the most important factors though are the increase in population and trade. I reckon the increase in population is important because without people, none of the other factors are possible. The increase in population led to more ideas and more workers. I think that trade was important because it was the main source of wealth for Britain. The Industrial revolution brought on more technology, wealth and power, but there was a dreadful consequence. The people were living in filth, working unthinkable hours and being paid very little. The revolution shaped modern society to what it is today. ...read more.