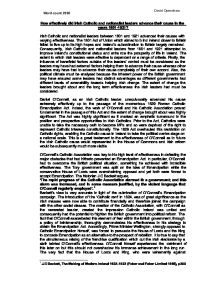 How effectively did Irish Catholic and nationalist leaders advance their cause in the years 1801-1921? Irish Catholic and nationalist leaders between 1801 and 1921 advanced their causes with varying effectiveness. The 1801 Act of Union which aimed to bind Ireland closer to Britain failed to live up to its high hopes and Ireland's subordination to Britain largely remained. Consequently, Irish Catholic and nationalist leaders from 1801 and 1921 attempted to improve Ireland's constitutional status and enhance the prosperity of life in Ireland. The extent to which Irish leaders were effective is dependant on a range of criteria. Firstly, the influence of beneficial factors outside of the leaders' control must be considered as the leaders may have had external factors helping them to advance their cause whereas other leaders may have had to advance their cause completely of their own accord. Also, the political climate must be analysed because the inherent power of the British government may have ensured some leaders had distinct advantages as different governments had different levels of amenability towards helping Irish change. The extent of change the leaders brought about and the long term effectiveness the Irish leaders had must be considered. Daniel O'Connell, as an Irish Catholic leader, unequivocally advanced his cause extremely effectively up to the passage of the momentous 1829 Roman Catholic Emancipation Act. Indeed, the work of O'Connell and his Catholic Association proved fundamental in the passage of this Act and the extent of change brought about was highly significant. The Act was highly significant as it marked an emphatic turnaround in the position and prospective opportunities to Irish Catholics. Prior to the Act, Catholics were unable to take the necessary oath to become MPs and so were deprived of the right to represent Catholic interests constitutionally. ...read more.

Parnell advanced his Home Rule cause, self-government for Ireland, effectively from 1882 until the rejection of the First Home Rule Bill of 1886. This is because he succeeded in forcing Irish Home Rule to the core of British politics due to his highly effective work in ensuring his IPP held the balance of power for the British government. In essence, Parnell's efforts greatly boosted the prospect of Home Rule as Gladstone introduced a Home Rule Bill largely acceptable to Parnell, to gain his support needed to form a government. Although it could be argued Gladstone had already converted to Home Rule, the fact Parnell manoeuvred the IPP to hold the balance of power would have pressurised him further to go through with a Bill. Parnell's effectiveness gains greater substance due to the emphatic way he promoted Home Rule. This is because of the decisive way in which he directed the course of Irish politics towards Home Rule, through establishing the IPP as the dominant Irish nationalist organisation, subject to his unquestionable authority. Donald MacRaild claims, 'Ultimately, Parnell had always sought to supersede physical force nationalism by his constitutional methods'.4 MacRaild's view is evidently precise, exemplified by the demise of the agrarian agitation Land League and Parnell's creation of the National League in 1882, based on achieving Home Rule constitutionally. MacRaild's comment is pertinent in proving Parnell's effectiveness as it is clear that he was proficient in turning his aims into realities. The fact the IPP held the balance of power in 1885 was down to Parnell's National League as it was indispensable in winning over the Irish classes nationwide to the extent that the Party secured 85 Irish seats out of 103. ...read more.

However, aside from the immediate inevitability of exclusion, Lloyd George evidently gained the upper hand on the Ulster issue through deceiving Sinn Fein into believing a Boundary Commission and his influence would ensure the six counties would fall into the Treaty. This was proven to be a bluff from Lloyd George in the long term and this indicates a slight element of ineffectiveness on the behalf of Sinn Fein simply because they believed this falsity and were outwitted in this part of the Treaty. In conclusion, it is clear that some Irish leaders were more effective than others in advancing their causes. In relation to the conceptual criteria it would appear O'Connell undertook the most effective advancement of Irish Catholic through Catholic Emancipation. O'Connell had no significant factors outside of his control working in his favour and had to tackle a hostile political situation to force Britain to yield to his demands. The fact that the Emancipation Act held great importance for the future of Catholics only further demonstrates his emphatic effectiveness. However, O'Connell's overall effectiveness is let by the disappointing Whig alliance and Repeal campaign. Parnell was effective in the manner he promoted Home Rule to the British government but his effectiveness clearly suffered as the Home Rule Cause was weakened as a result of his role in destroying the IPP's powerful unity coupled with the detrimental response of pro-Unionist Ulster. Sinn Fein's rise to prominence was undoubtedly aided by external factors such as the Easter Rising myth and British mistakes and so its effectiveness is automatically downgraded. Furthermore, the 1921 Treaty appears to have stemmed from the IRA's instigation of war as opposed to Sinn Fein's political efforts. Nevertheless Sinn Fein were effective in negotiating the Treaty that remarkably changed Ireland's constitutional status. ...read more.