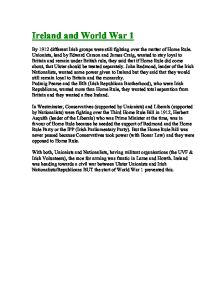 Ireland and World War 1 By 1912 different Irish groups were still fighting over the matter of Home Rule. Unionists, lead by Edward Carson and James Craig, wanted to stay loyal to Britain and remain under British rule, they said that if Home Rule did come about, that Ulster should be treated separately. John Redmond, leader of the Irish Nationalists, wanted some power given to Ireland but they said that they would still remain loyal to Britain and the monarchy. Padraig Pearse and the IRB (Irish Republican Brotherhood), who were Irish Republicans, wanted more than Home Rule, they wanted total separation from Britain and they wanted a free Ireland. In Westminster, Conservatives (supported by Unionists) and Liberals (supported by Nationalists) were fighting over the Third Home Rule Bill in 1912, Herbert Asquith (leader of the Liberals) who was Prime Minister at the time, was in favour of Home Rule because he needed the support of Redmond and the Home Rule Party or the IPP (Irish Parliamentary Party). But the Home Rule Bill was never passed because Conservatives took power (with Bonar Law) and they were opposed to Home Rule. With both, Unionists and Nationalists, having militant organisations (the UVF & Irish Volunteers), the race for arming was frantic in Larne and Howth. ...read more.

However, Carson was a brilliant public speaker and a very clever leader. The first chance most Ulster Unionists got to hear Carson was in September 1911 when he spoke to 50,000 Orangemen gathered at Craigavon, James Craig's home outside Belfast. James Craig was a perfect deputy for Carson. Craig was quiet, solid and reliable, and he was a terrific organizer. He used his talents to organise a number of mass protest meetings. Even though the two men were different they both lead the Ulster Unionist stand against Home Rule. When the Third Home Rule was discussed in parliament, nearly every Unionist speaker raised the question of Ulster. They claimed that there were two different sets of people in Ireland. Not only were there two religions, there were two races or even two nations in the country. For the Unionists it followed that if Ireland was to be given Home Rule, then Ulster should also receive special treatment for Ulster, but to use Ulster opposition to force the Liberal government to drop Home Rule altogether. Fighting in World War 1 was important for Unionism because they wanted to show that they are loyal, In return, they expected the British government to allow most of Ulster to remain outside of the Home Rule arrangements for Ireland when the war was finally over. ...read more.

A lot saw it as an easy job but that was far from the truth. Some young people just wanted to help Britain in the war and some were influenced by British propaganda. A lot of Irish young people died in the war. f. Farmers-- A big percentage of Irelands economy was agricultural and the war created a lot of work and therefore money for farmers. Irish farmers helped the British war effort by sending them food i.e. eggs, milk, bread etc. Also, farmers made uniforms and other materials for the British, usually from Linen. There was one aspect of the war which farmers feared, conscription. It meant they had to abandon their work and fight, so their farm was unattended and therefore they lost money. g. Women-- A lot of southern women in Ireland didn't like that their husbands and sons might die in the war for the British but in the North most (protestant) women were proud to see their men go and fight for Britain. Women found work in the factories making the materials for war after the Munitions Ministry was set up and conscription introduced (1916), since there was a shortage of men in the factories. Women also did other 'men jobs' like driving the buses and tarring the roads. 'Land Girls' helped to grow and harvest the food, which was desperately needed due to German submarine attacks on the British merchant ships.. ...read more.

This response covers a great number of groups and is clear and accurate in its evidence. There is a lack of focus at times though, and the author takes too long to link points to WW1. Some explanations are better supported than others. 3 out of 5 stars.