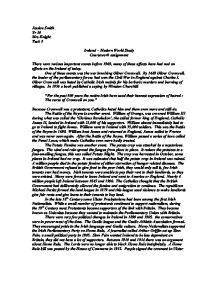 Jessica Smith Yr 10 Mrs Knight Task 3 Ireland - Modern World Study Coursework assignment There were various important events before 1969, many of these affects have had nod on effects on the Ireland of today. One of these events was the war involving Oliver Cromwell. By 1649 Oliver Cromwell, the leader of the parliamentary forces had won the Civil War in England against Charles I. Oliver Cromwell was hated by Catholic Irish mainly for his barbaric murders and burning of villages. In 1956 a book published a saying by Winston Churchill "For the past 300 years the native Irish have used their keenest expression of hatred : The curse of Cromwell on you." Because Cromwell was a protestant, Catholics hated him and them even more and still do. The Battle of the Boyne is another event. William of Orange, was crowned William III during what was called the 'Glorious Revolution', the exiled former king of England, Catholic James II, landed in Ireland with 21,000 of his supporters. William almost immediately had to go to Ireland to fight James. William went to Ireland with 35,000 soldiers. This was the Battle of the Boyne in 1690. William beat James and returned to England, James exiled to France and was never seen again. After the Battle of the Boyne, William passed a series of laws called the Penal Laws; which made Catholics even more badly treated. The Potato Famine was another event. The potato crop was attacked by a mysterious fungus. The wind and rain spread the fungus from place to place. It reduce the potatoes to a foul-smelling fungus, this was called Potato Blight. The crop was harvested in October, some places in Ireland had no crop. It was estimated that half the potato crop in Ireland was ruined. A million people died in the potato famine of either starvation of hunger related diseases. ...read more.

The march passed by the Catholic Bogside and the police became involved in the riots. The rioting and violence increased and after two days the new Prime Minister of Northern Ireland, Chichester-Clark, asked the Government in Westminster to send troops into restore order. The riots were covered on television and the event was called the Battle of the Bogside. The troubles in Derry started riots in Belfast, where there was use of guns and huge destruction of property. Fear that was created in the towns resulted in massive population movements between the August of 1969 and February 1973. It was the estimated that some 60,000 people were forced to leave their homes. At the time it was the greatest and largest enforced movement of people in Europe since 1945. The IRA's reputation in the summer of 1969 was badly damaged because it had not been able to protect the Catholics. Many slogans began to appear on the walls in Belfast: "IRA - I Ran Away" There were some people in the IRA who felt that the policy of uniting Ireland had to be followed, and if violence had to be used to achieve their aim, then they would use violence. Despite this, some members of the IRA wanted to unite Ireland by peaceful means. Therefore a split in the IRA happened, those who wished to use violence called themselves the Provisional IRA. When it was first established there was about 30 Provisionals in Belfast, but they soon spread and became the main force behind Irish Nationalism. Violence continued between both communities. On Sunday, January 30th 1972, 13 civilians were killed, a 14th died from his injuries in hospital. 17 were injured after paratroopers of the British Army opened fire on an illegal demonstration against Internment - Internment was introduced to Northern Ireland in August 1971, this was the imprisonment of suspected terrorists without trial, and was regarded by many as an Infringement of Civil Rights. ...read more.

The police and army were sent in to protect them, but more violence took place and eventually the young children were forced to take another route to school. This event sums up how far the two sides, Nationalist and Unionist have grown apart. It shows the problems of finding a lasting peace between two communities. In August 2002, David Trimble was under severe pressure to deliver significant IRA decommissioning as no further weapons had been given up. David Trimble's resignation was overshadowed by an IRA spy. Who was found working at Stormont. Unionist representatives called for Sinn Fein to be thrown out the Government, as the spy was a member of Sinn Fein. Over the years, the IRA have bombed many places. An event close to Runcorn was in Warrington on the 2nd March 1995, two young boys were killed; Jonathan Ball and Tim Parry, there is a fountain in their memory. Ireland today is still very much divided, and the IRA still have not given up their weapons. The IRA is now more like an organised Crime Association. They smuggle things into Ireland i.e. drugs etc, 2 million pounds worth of cigarettes, pirate dvd's and cd's, no name brand vodka, each year they gain a total of �200 million from money laundering. Also this year a �26 million bank robbery occurred and the IRA said that they had nothing to do with it. Recently a man named Robert McCarthy was murdered by the IRA, they claim to know nothing about it or who did it, but have offered to shoot the men who shot Robert McCarthy. I think that the events before 1969 have had an effect, because the dislike for each community has been passed down from generation to generation and wars have been fought over religions, people have been burned at the stake for which religion they followed. Despite this, the events during and after 1969 did not help matters. It will take centuries for the hatred to grow out of the country and people, maybe even longer. Jess Smith ...read more.