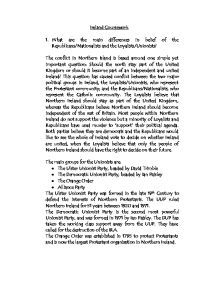 Ireland - What are the main differences in belief of the Republicans/Nationalists and the Loyalists/Unionists?

Ireland Coursework 1. What are the main differences in belief of the Republicans/Nationalists and the Loyalists/Unionists? The conflict in Northern Island is based around one simple yet important question: Should the north stay part of the United Kingdom or should it become part of an independent and united Ireland? This question has caused conflict between the two major political groups in Ireland, the Loyalists/Unionists, who represent the Protestant community; and the Republicans/Nationalists, who represent the Catholic community. The Loyalists believe that Northern Ireland should stay as part of the United Kingdom, whereas the Republicans believe Northern Ireland should become independent of the rest of Britain. Most people within Northern Ireland do not support the violence but a minority of Loyalists and Republicans have used murder to "support" their political agenda. ...read more.

The UUP ruled Northern Ireland for 51 years between 1920 and 1971. The Democratic Unionist Party is the second most powerful Unionist Party, and was formed in 1971 by Ian Paisley. The DUP has taken the working class support away from the UUP. They have called for the destruction of the IRA. The Orange Order was established in 1795 to protect Protestants and is now the largest Protestant organisation in Northern Ireland. The Alliance Party was formed in 1970 to promote reform and reconciliation in Northern Ireland. It support comes from middle-class Protestants and Catholics. The main groups for the Nationalists are: * Sinn Fein, headed by Gerry Adams * The Social Democratic and Labour Party (SDLP), headed by John Hume Sinn Fein backs the violence and terrorism of the IRA and is ...read more.

The Nationalist Paramilitaries are the IRA and the "Real" IRA. The IRA is the most organised of the paramilitary groups, and has very large networks of support and many international contacts. They are currently observing a second ceasefire but still remain undefeated and strong. The "Real" IRA is headed by former IRA members who are opposed to the peace process. They are not observing ceasefire and have launched attacks using bombs and mortar. It has a very small amount of support and is currently trying to gain more arms. The Unionist Paramilitaries are The UDA. They are a Loyalist vigilante group and have claimed responsibility for assignations and bombing. They were declared illegal in 1992. Their ceasefire since 1994 has mainly been observed but they were involved in Catholic killings this year. They refuse to decommission any arms until the IRA declares that the conflict is over or disarm themselves. ...read more.