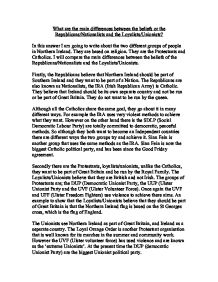 What are the main differences between the beliefs or the Republicans/Nationalists and the Loyalists/Unionists? In this answer I am going to write about the two different groups of people in Northern Ireland. They are based on religion. They are the Protestants and Catholics. I will compare the main differences between the beliefs of the Republicans/Nationalists and the Loyalists/Unionists. Firstly, the Republicans believe that Northern Ireland should be part of Southern Ireland and they want to be part of a Nation. The Republicans are also known as Nationalists, the IRA (Irish Republican Army) is Catholic. They believe that Ireland should be its own separate country and not be run or be part of Great Britain. ...read more.

The Loyalists/Unionists believe that they are British and not Irish. The groups of Protestants are; the DUP (Democratic Unionist Party, the UUP (Ulster Unionist Party and the UVF (Ulster Volunteer Force). Once again the UVF and UFF (Ulster Freedom Fighters) use violence to achieve there aims. An example to show that the Loyalists/Unionists believe that they should be part of Great Britain is that the Northern Ireland flag is based on the St Georges cross, which is the flag of England. The Unionists see Northern Ireland as part of Great Britain, and Ireland as a separate country. The Loyal Orange Order is another Protestant organisation that is well known for its marches in the summer and community work. ...read more.