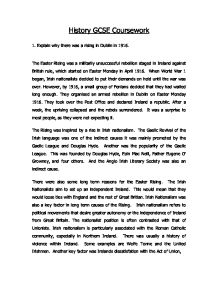 History GCSE Coursework 1. Explain why there was a rising in Dublin in 1916. The Easter Rising was a militarily unsuccessful rebellion staged in Ireland against British rule, which started on Easter Monday in April 1916. When World War 1 began, Irish nationalists decided to put their demands on hold until the war was over. However, by 1916, a small group of Fenians decided that they had waited long enough. They organised an armed rebellion in Dublin on Easter Monday 1916. They took over the Post Office and declared Ireland a republic. After a week, the uprising collapsed and the rebels surrendered. It was a surprise to most people, as they were not expecting it. The Rising was inspired by a rise in Irish nationalism. The Gaelic Revival of the Irish language was one of the indirect causes it was mainly promoted by the Gaelic League and Douglas Hyde. Another was the popularity of the Gaelic League. This was founded by Douglas Hyde, Eoin Mac Neill, Father Eugene O' Growney, and four others. And the Anglo Irish Literary Society was also an indirect cause. There were also some long term reasons for the Easter Rising. The Irish Nationalists aim to set up an independent Ireland. This would mean that they would loose ties with England and the rest of Great Britian. Irish Nationalism was also a key factor in long term causes of the Rising. Irish nationalism refers to political movements that desire greater autonomy or the independence of Ireland from Great Britain. The nationalist position is often contrasted with that of Unionists. Irish nationalism is particularly associated with the Roman Catholic community, especially in Northern Ireland. There was usually a history of violence within Ireland. Some examples are Wolfe Tonne and the United Irishmen. Another key factor was Irelands dissatisfation with the Act of Union, 1800. During the Irish Famine between 1846 and 1849 the British government at Westminster did very little to help the people suffering. ...read more.

But it does have some flaws as these cultural differences were apparent from the 1920s, and so the question is asked, why didn't the troubles start then? In addition to this, education should be teaching values to children, not to be provoking violence and separation. In the next source, source E, it was a pictorial source from a Protestant viewpoint. Source E is a nineteenth century showing Erin (Ireland) bound in rope by a Catholic priest. This shows us that Protestants thought that it was the Catholic Church controlled the Irish people and Ireland. I feel that this source is more useful than the previous source (source D) as it shows us that Protestants felt fear towards Catholics. Protestants felt that if Ireland became an all Ireland that the Protestants would be ruled by the Catholics. Although source E is not immediate enough to be related to the troubles, it defines deeper cultural opinions and fears between these two separate communities. Source F, the next source, is, in my opinion, a very useful source. It is a pictorial source, showing a map of Derry, and the Gerrymandering going on in Derry in 1966. "Gerry Mander" was the name of an American councillor who fixed the electoral boundaries to win the election, since then, this type of rigging of elections are known as the "Gerrymandering." Source F shows the political differences in the 1960's as although there were 2:1 Catholics to Protestants living in Derry at that time, there were only 8 nationalist councillors, and 12 unionist councillors in the Derry council in 1966. I believe that source F is one of the more useful sources that I have studied because it is more of an immediate cause of the troubles, unlike the previous two sources. Due to this Gerrymandering, Catholics felt that Protestants were given the most powerful jobs within the government, this is proved in source J as it told us that only 36 out of 500 jobs were held by Catholics at Stormont in 1932, and all of the top positions were all held by Protestants. ...read more.

Another source which I studied is from a Catholic priest, Father Bradley, he describes b****y Sunday as a "massacre." He suggested that the British army should "hang its head in shame" after the "disgusting violence" which he witnessed. Father Bradley possibly had this view because he is a Catholic, and this is a nationalist viewpoint, and a majority of Catholics believed that the army were mainly at fault for the troubles. On the other hand, in a different source in which Nigel Wade writing about b****y Sunday for the Daily Telegraph. It is very conservative. He holds a more neutral viewpoint, and states that it was "impossible to tell who fired the first shots". This is a more diplomatic view, as he is writing for what is possibly a more diplomatic paper, which is refusing to take sides with either the nationalists or the unionists. Similarly, a report from Lord Widgery, a British judge who investigated b****y Sunday for the British government said, "some soldiers showed a high degree of responsibility ...(others) firing bordered on the reckless." This shows a neutral understanding of both sides and is again very sensitive to both arguments. This is possibly because Lord Widgery maybe felt obliged to agree with the British government, rather than possibly starting a controversy by blaming the army for the 14 civilians killed. To conclude, there are many reasons for all of the different historical interpretations of b****y Sunday; different people simply believe in different things, the nationalists believe the army was completely at fault, the unionists believe the civil rights marchers should not have been marching where they were, and then those who think b****y Sunday was a tragedy waiting to happen. The interpretations that I have mentioned above are reliable to a certain extent. Even though this inquiry can't bring back the 14 victims it can bring an end to the Troubles in Northern Ireland. ?? ?? ?? ?? ...read more.