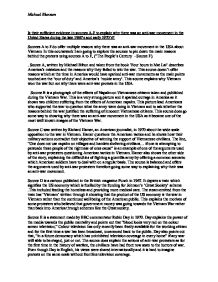 Is their sufficient evidence in sources A-F to explain why there was an anti-war movement in the United States during the late 1960's and early 1970's?

Is their sufficient evidence in sources A-F to explain why there was an anti-war movement in the United States during the late 1960's and early 1970's? Sources A to F do offer multiple reasons why there was an anti-war movement in the USA about Vietnam. In this coursework I am going to explore the sources to pin down the main reasons behind the protests using sources A to F, ("The People's Century - Source F). . Source A, written by Michael Bilton and taken from the book 'Four hours in Mat Lai' describes America's mistakes and the reasons why they failed to win the war. This source doesn't offer reasons which at the time in America would have sparked anti-war movements as the main points touched are the 'tour of duty' and America's 'rookie army'. This source explains why Vietnam won the war but not why there were anti-war protests in the USA. Source B is a photograph of the effects of Napalm on Vietnamese citizens taken and published during the Vietnam War. ...read more.

Hamer also shows the other side of the story, explaining the difficulties of fighting a guerrilla army by offering a common scenario which American soldiers have to deal with on a regular basis. The source is balanced and offers the arguments used by anti-war protesters therefore going some way to explaining why their was an anti-war movement. Source D is a cartoon published in the British magazine Punch in 1967. It depicts a train which signifies the US economy which is fuelled by the funding for Johnson's 'Great Society' scheme .This included feeding the homeless and providing more medical care. The steam emitted from the train has 'Vietnam' written through it showing that the product of the US economy is the war in Vietnam rather than the continued well being of the American public. This explains the motives of some protesters who believed that government money was going towards the Vietnam War rather than back into America through schemes like the Great society. ...read more.

The lines "We came in spastic/Like tameless horses/We left in plastic/As numbered corpses," shows Joels view on how unexpierenced 'tamelass' young americans were being sent to their deaths.This source shows the war from the perspective of a soldier and the song is more of a protest song for Vietnam veterans rather than the American public. The source is helpful in discovering why there were anti-war protests in the 1960s and 1970's. In my opinion the strongest sources are sources B and E, as these two sources show how the American public were exposed to the horrors of war, and therefore they are the most likely reason for mass protest .The weakest source, in my opinion, is Source A because, although it tells us of a Low IQ and inexperience among soldiers it does not give reason for an anti-war movement in America. In conclusion, I believe that, throughout the sources, there is more than enough information for us to understand why there was an anti-war movement in the United States during the late 60s and early 70s. . Michael Blunsum ...read more.