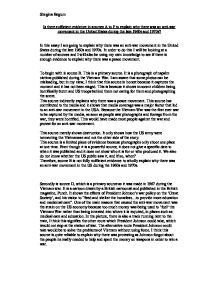 Is there sufficient evidence in sources A to F to explain why there was an anti-war movement in the United States during the late 1960s and 1970s?

On the other hand, as this was published in a British magazine, this may not have directly affected the US. It may not have even been seen by the US. This source alone is not fully sufficient to explain why there was an anti-war movement because I believe that this source being viewed itself would not influence the public to protest against the war and set up a peace movement. Next is source E which is a primary source. This source is a statement made by the BBC commentator, Robin Day in 1970 about the Vietnam War. In my view it is a very powerful source and it provides sound evidence to explain why there was an anti-war movement. From my own knowledge I know that this war the first war to be captured by the media, so everyone had the opportunity to see all the suffering, sickness and death happening on colour screens right in front of them. To add to the overall anxiety felt by the public towards the war it also suggests that due to the "uninhibited television coverage" a democratic country will never be able fight a war "however just". Therefore, in my view, this source is extremely sufficient to explain why there was an anti-war movement during the 1960s and 1970s. ...read more.

Therefore, it is biased. Finally, I feel that this source could not have had an effect on the peace movement. The reason for this is because it was published twenty years after the war in 1992 therefore, it would have not been seen by the public at the time of the war. This is insufficient evidence to show why there was a peace movement in the US. In conclusion, I believe that the majority of the sources do not provide sufficient evidence in explaining why there was a peace movement during the 1960s and 1970s. One reason for this is because some of the sources are biased; only showing one side of the story. However, in my view the most important reason why the sources were not sufficient is because there was no information showing details of where and when it was published. So one can argue, did these sources actually impact upon the US public? Nevertheless, there is one powerful source, which being viewed itself, could have led to an anti-war movement. This source links to the media coverage of the war. I think that the media coverage was a huge factor as to why people were opposed to the war. From my own knowledge I know that the introduction of the colour screen televisions played a huge role in influencing people's attitudes. ?? ?? ?? ?? Shegina Begum ...read more.