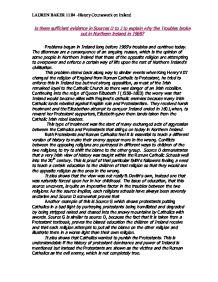 Is there sufficient evidence in Sources D to J to explain why the Troubles broke out in Northern Ireland in 1969?

Is there sufficient evidence in Sources D to J to explain why the Troubles broke out in Northern Ireland in 1969? Problems began in Ireland long before 1969's troubles and continue today. The dilemmas are a consequence of an ongoing reason, which is the opinion of some people in Northern Ireland that those of the opposite religion are attempting to overpower and enforce a certain way of life upon the rest of Northern Ireland's civilisation. This problem stems back along way to similar events when King Henry VIII changed the religion of England from Roman Catholic to Protestant, he tried to enforce this in Ireland too but met strong opposition, as most of the Irish remained loyal to the Catholic Church so there was danger of an Irish rebellion. Continuing into the reign of Queen Elizabeth I (1558-1603) the worry was that Ireland would become allies with England's catholic enemies because many Irish Catholic lords rebelled against English rule and Protestantism. They received harsh treatment and the Elizabethan attempt to conquer Ireland ended in 1601,when, to reward her Protestant supporters, Elizabeth gave them lands taken from the Catholic Irish rebel leaders. ...read more.

Houses, jobs, and votes being unmistakably unfairly allocated, lead to the setting up of the CRA. Protestants were kept in employment in times of depression in preference to fellow Catholic workers. For instance in 1961, 68/75 bus drivers in the city of Fermanagh were Protestant. The unfair election system called "The Gerrymander" supplied the majority of votes to Protestants. 25'000 adults were therefore disenfranchised for local elections, nearly all of them being Catholics. Source F is an example of the issue of unfair voting within Northern Ireland. The map shows that in one ward the Catholic voters had 10'047 of the 11'185 votes, which is evidently unfair. On the other hand, the other two wards shown on the map have a Protestant domination of votes. Overall, the source shows that there was unfair distribution of votes, which is another significant reason in the build-up to Ireland's troubles of 1969. Still, although this appears to suggest that Protestants were being unnecessarily harsh to Catholics, another factor not portrayed in the sources is the Protestants reasons for fearing a United Ireland. Since they regarded Catholics as their enemies, they did not want to give them higher positions because they felt the Catholics would destroy them. ...read more.

Though not entirely happy, the Unionists, who wanted Ireland to remain closely linked with Britain, accepted Home Rule (Britain's control) in just the six counties of Ulster. However, the Nationalists continued to fight for a United Independent Ireland. Catholics and Protestants live in both the two divided countries. Therefore partition has been ineffective in bringing peace to Ireland. Instead friction continued to cause major issues between the two religions but this is not mentioned in any of the supplied sources and so fails to contribute to a listing of foundations on which Ireland's troubles have developed. This is yet another example of further causes that built up to 1969's trouble. However without these mentioned in Sources D to I, there is not sufficient information to generate a fairly decided conclusion to why troubles broke out in Northern Ireland in 1969. The Sources are well selected and show a diverse collection of important aspects that contributed to the troubles of 1969.They give a reasonable idea of some causes of Irelands problems. On the other hand many events of greater importance are not mentioned. Therefore I do not think there is sufficient evidence in them to fully and fairly explain why the troubles broke out in Northern Ireland in 1969. LAUREN BAKER 11B4 -History Coursework on Ireland ...read more.