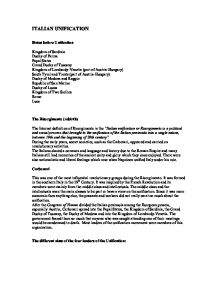 ITALIAN UNIFICATION States before Unification Kingdom of Sardinia Duchy of Parma Papal States Grand Duchy of Tuscany Kingdom of Lombardy-Venetia (part of Austria-Hungary) South Tyrol and Trents (part of Austria-Hungary) Duchy of Modena and Reggio Republic of San Marino Duchy of Lucca Kingdom of Two Sicilies Rome Luca The Risorgimento (rebirth) The Internet definition of Risorgimento is the "Italian unification or Risorgimento is a political and social process that brought to the unification of the Italian peninsula into a single nation, between 19th and the beginning of 20th century" During the early years, secret societies, such as the Carbonari, appeared and carried on revolutionary activities. The Italians shared a common and language and history due to the Roman Empire and many Italians still had memories of the ancient unity and glory which they once enjoyed. There were also nationalistic and liberal feelings which rose when Napoleon unified Italy under his rule. Carbonari This was one of the most influential revolutionary groups during the Risorgimento. It was formed in the southern Italy in the 19th Century. It was inspired by the French Revolution and its members were mainly from the middle class and intellectuals. The middle class and the intellectuals were the main classes to be part or have a view on the unification. Since it was more economic then anything else, the peasants and workers did not really care too much about the unification. ...read more.

Cavour started traveling but was asked to become Prime Minister in Nov 1852 after D'Azeglio resigned and had suggested Cavour as the new Prime Minister. What had happened was that the Parliament had put forward a new bill to allow civil marriages to occur without a Church service. The Church had pressured the King into asking the Parliament to reject the bill but D'Azeglio was against that and resigned. Cavour did reject the bill since that was the term if he wanted to become Prime Minister. In 1854 Italy joined the Crimean War (The war began as a quarrel between Russian Orthodox monks and French Catholics over who had precedence at the holy Places in Jerusalem and Nazereth. Britain declared war against Russia and Italy joined in on the side of Britain so as to keep her relationship with Britain and France.) After the war, Cavour went to the Congress of Paris where he denounced Austrias occupation of Italy, arranged to meet Napoleon III and established Cavour as the voice for Italy. Cavour signed a treaty with Napoleon that France would help Sardinia if she got attacked by Austria. Cavour then provoked Austria to attack. This was so Cavour could unite northern Italy but Napoleon pulled out during the war and the treaty signed after losing the war allowed Austria to keep Venetia and transferred the territories conquered by Sardinia back to their original rulers. ...read more.

He also supported his Prime Minister Cavour, but seemed to also try and please Garibaldi. He and Cavour worked very closely with each other and both wanted a unified Italy. King Victor Emmanuel became the first King of the Unified Italy on 17th March 1861. To the disappointment of the Italians, he kept his dynastic name Victor Emmanuel II instead of being called Victor Emmanuel I of Italy. Papal States Although Garibaldi tried twice to invade the Papal States, he was hindered both times. Once by Napoleon III and another time by Victor Emmanuel II himself. Only French intervention at Rome prevented the total absorption of the Papal States. Napoleon III did this to protect the Popes rights. After Napoleon III fell from power in 1870, Victor Emmanuel could finally take control over the Papal States and include them in his newly formed State. Pope Pius IX refused to accept this and became a 'prisoner' in the Vatican. His successors did the same until the Lateran Treaty was signed, which stated that the Vatican City would be created. Venetia was obtained by promising Prussia that when they went to war against Austria, Italy would stay out of the war. After Prussia won the Austro-Prussian war, Prussia handed over Venetia to Italy. France also played a role in the unification of Italy by firstly protecting the Papal States and therefore keeping the unification from occurring earlier. Napoleon III also formed an alliance with Sardinia and therefore playing a double game. France also lost territory when Garibaldi attacked Sicily and pronounced himself dictator. ...read more.