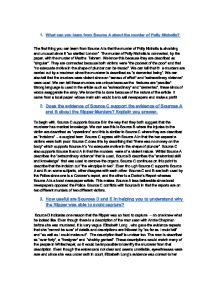 1. What can you learn from Source A about the murder of Polly Nicholls? The first thing you can learn from Source A is that the murder of Polly Nicholls is shocking and unusual since it "so startled London". The murder of Polly Nicholls is connected, by the paper, with the murder of Martha Tabram. We know this because they are described as "singular". They are connected because both victims were "the poorest of the poor" and that "no adequate motive in the shape of plunder can be traced". We can tell that the murders are carried out by a madman since the murderer is described as "a demented being". We can also tell that the murders were violent since an "excess of effort" and "extraordinary violence" were used. We can tell these murders are unique because the features are "peculiar". Strong language is used in the article such as "extraordinary" and "demented", these kinds of words exaggerate the story. We know this is done because of the nature of the article. It came from a local paper whose main aim would be to sell newspapers and make a profit. 2. Does the evidence of Source C support the evidence of Sources A and B about the Ripper Murders? Explain you answer. To begin with, Source C supports Source B in the way that they both suggest that the murderer has medical knowledge. We can see this is Source B where the injuries to the victim are described as "operations" and this is similar to Source C where they are described as "incisions" - a surgical term. Source C agrees with Source A in that the two separate victims were both poor. ...read more.

Photography was used in investigations, but was a new process. In 1862 "photographs of criminals were taken in prison and then sent to Scotland Yard" these made up the 'Rogues Gallery'. The problem with this was that the photographs were used to identify criminal 'types' by the shape of their heads rather than to keep records. Police were mainly unpopular with the general public because of their methods of crowd control like baton charging. Police developed a reputation for heavy-handedness and violence and cases such as "a baton charge resulted in a 78 year old man being trampled to death" in 1868 just seemed to prove this reputation. Even though detectives were used in murder cases, the method they used of following suspicious characters was no different to that of general policemen. Police had learnt the value of footprints, but were still unaware of how to use the information correctly and it was not until 1901 that fingerprinting was developed. Police constables were not trained to deal with crimes but more rained in military drills and inspections were based on parades rather than police work and furthermore most constables learnt their "trade on the job." It seemed that the importance to look good and behave correctly out-weighed the importance of solving and preventing crimes. Even though during the day an average beat would be seven and a half miles, it would be reduced to just two miles at night. This was inefficient since many crimes, including the Jack the Ripper murders, were committed at night time. During the Ripper murders, the police followed up every piece of evidence available to them. This was because they had hardly any leads on to who the murderer could be. ...read more.

Inspector Abberline was in charge of the investigation and this was a good because he had spent most of his career in Whitechapel. This meant that he knew the surrounding area and many of the people. The police increased patrols after the double event and appealed for witnesses but to no avail. Even though the police seem to have done all they could to catch Jack the Ripper, it is evident that there are also flaws in their investigation. The police let the newspapers virtually force them into arresting John Pizer even though he had alibis for the nights in question and they continued to be affected by the stories in the newspapers such as the 'Dear Boss' letter. The police ignored Elizabeth Long's estimate of the time of death for Annie Chapman even though the police doctor admitted his estimate could be wrong. The police also thought that the killer lived in Whitechapel, whereas evidence suggests that he didn't. All murders were committed on the weekend, which suggests the murderer has a job and only travels to Whitechapel at the weekends. In conclusion, even though there were many improvements that could have been made to the investigation into the Jack the Ripper murders such as improved policing methods and not wasting time, there was not really much available to the police force in the late 19th century. On the little to none evidence that the police had, they still carried on the investigation to the best of their ability and used the resources available to them, like doctors and photography, to aid the investigation. Overall, whilst policing methods had not changed, this was not the fault of the police force because they did not have the knowledge to capture Jack the Ripper. ?? ?? ?? ?? ...read more.