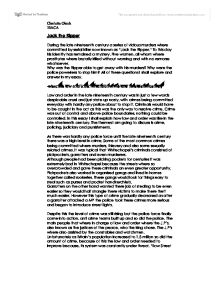 Jack the Ripper During the late nineteenth century a series of vicious murders where committed by serial killer now known as "Jack the Ripper." To this day his identity has remained a mystery. Five women, all whom where prostitutes where brutally killed without warning and with no remorse whatsoever. Why was the Ripper able to get away with his murders? Why were the police powerless to stop him? All of these questions I shall explore and answer in my essay. -Describe law and order in London in the late nineteenth century Law and order in the late nineteenth century was in just a few words despicable cruel and just state up nasty, with crimes being committed everyday with hardly any police about to stop it. Criminals would have to be caught in the act as this was the only way to resolve crime. Crime was out of control and above police boundaries, nothing could be controlled. In this essay I shall explain how law and order was like in the late nineteenth century. The themes I am going to discuss is crime, policing, judiciary and punishments. As there was hardly any police force until the late nineteenth century there was a high level in crime. Some of the most common crimes being committed where murders, thievery and also some sexually related crimes. It was typical that Whitechapel's criminals consisted of pickpockets, garrotters and even murderers. Although people had been picking pockets for centuries it was extremely bad in Whitechapel because the streets where so overcrowded and gave these criminals an even greater opportunity. Pickpockets also worked in organised gangs and lived in homes together called rookeries. These gangs would look for things easy to steal such as purses and pocket handkerchiefs. ...read more.

He then placed his victims gently on the ground; we know this because this was no bruising to suggest that he just let them fall to the ground. The Whitechapel murderer then cut their victims throats from ear to ear. After this the murderer would then carry out any other mutilations; some of these consisted of removing kidneys and others such as the removal of the victim's sexual organs. The gruesome nature of the crimes suggests to me that the murderers knowledge of anatomy and experience with a knife such as a butcher or surgeon. It all suggests that the murder was not right in his head to go out and not just murder someone but demolish their body. I believe that jack the ripper was so famous because he was the first serial killer and people where amazed by his cruel and harsh actions. There was also a lack of witnesses which meant that people could create their own theories about what happened. Therefore hundreds of letters from people claiming to be the murderer where sent to the press. However the press and police where positive that all but one of these letters where fakes so they did not them seriously. The one letter that they did think was real was called the "dear boss" letter. But yet the newspapers still took it as a hoax, but a believable one so they did not give it to the police until a couple days later, this was seen as a costly mistake because the following night that the police received the letter the double murder took place, therefore preventing the one chance that the police had to catch the murderer. ...read more.

This meant that the police had to search every letter for clues, which meant that the police were wasting their time on these letters, which could have been better spent by actually hunting down the ripper. These letters meant that the police had to turn to different suspects and also had to look at many different types of people. For example, many of these letters pointed the blame towards the Jews, claiming that they were those responsible for the shocking murders of jack the ripper. This was also seen in the witness' statements when many of the descriptions contained Jewish features. Most probably the witness' did not see jack the ripper at all but wished for the Jews or the foreigners to be blame as there was a lot of anti-Semitism in Whitechapel. This meant that police had to follow up the witness' statements even if they were not true and also if a witness did actually see Jack their description may not compare to those which were fake as many just wished for the Jews to be blamed. This also mean that as there were a lot of variation between the statements it meant that there was also a lot of suspects who made it harder to distinguish who Jack was. In conclusion I think that the police tried everything they could so they are not to blame the main reason why they could not catch Jack the ripper is because he was simply not leaving anything which could lead the police to getting him. Also from my research I gathered information that suggested that catching a serial killer with know motive in those times; especially if the serial killer knew what he was doing and was executing his victims in a professional manner. ?? ?? ?? ?? Charlotte Okrah 10ACA ...read more.