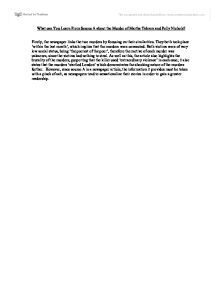 What can You Learn From Source A about the Murder of Martha Tabram and Polly Nichols? Firstly, the newspaper links the two murders by focusing on their similarities. They both took place 'within the last month', which implies that the murders were connected. Both victims were of very low social status, being 'the poorest of the poor', therefore the motive of each murder was unknown, since the victims had nothing to steal. As well as this, the article also highlights the brutality of the murders, purporting that the killer used 'extraordinary violence' in each case; it also states that the murders 'startled London' which demonstrates the shocking nature of the murders further. However, since source A is a newspaper article, the information it provides must be taken with a pinch of salt, as newspapers tend to sensationalize their stories in order to gain a greater readership. 2) Does the Evidence of Source C Support the Evidence of Sources A and B about the Ripper Murders? Explain Your Answer. Source C gives a very detailed account of the body of Elizabeth Stride. It is quite objective and informative, merely stating observational facts. Whereas Sources A and B are more persuasive and speculative - they both harbour ideas about the nature of the murderer and his motives. Source B speculates that the murderer has 'considerable anatomical skill'. ...read more.

One must bear in mind however, that this was a newspaper article, and in slandering the police, it may just have been humouring its readership - the police were unpopular with a lot of the public, especially the working class. What we can be sure of is that the nature of Whitechapel and its inhabitants made it very hard for the police to catch the Ripper, and if the police really were being neglectful, it would have made it all the easier for him to escape. 4) Use Sources F and G, and your own knowledge, to explain how the police tried to catch Jack the Ripper. The Met Police was a relatively new organisation, and the Ripper murders were of a nature they had never encountered before. Until then, the main duties of policemen were to maintain order on the streets, and to deter crime. This was done by performing regular patrols in the area on designated routes, called 'beats', and these beats were increased during the time Jack was making his attacks. However, criminal detection was not one of the police force's strong points. The police did have a Criminal Intelligence Department, with almost 300 detectives, but this department was in a germinal state, with little experience and no developed procedure. So actually finding the Ripper would have been an immense task for the police, who were ill-prepared for such an investigation. ...read more.

Unfortunately for the police, the way Whitechapel was constructed rendered their efforts to catch him red-handed ineffective. Whitechapel had many 'narrow, dark, and crooked' (Source E) alleyways, in which the Ripper could easily hide and avoid the policemen's gaze. The streets themselves had little lighting, so officers could see nothing except what fell under the light of their lanterns. Thus, the failure of the police to detect the Ripper on one of their patrols was through no fault of there own. I believe the heaviest blame for Jack the Ripper's escape falls on the government - for allowing Whitechapel to reach and remain in such a poverty stricken state. The fact that there were so many prostitutes in the area is a testament to this. If the government had provided shelter, or even alternative employment, for vulnerable women, deaths like that of Polly Nichols, who needed money for a bed in a lodging house, could have been prevented. Most importantly, there would be a far fewer number of prostitutes on the streets, making it easier for them to be policed and kept track of - since the sheer number of prostitutes in Whitechapel severely limited the ability of the police to protect them, and predict who the Ripper might attack next. To conclude, there is nothing which puts the police directly to blame; the main hindrances to their investigation were the state of the area of Whitechapel; which can be blamed on the government, poor scientific advancements, and the Ripper's method of killing - neither of which were the fault of the police. ...read more.