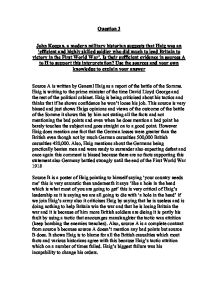 John Keegan, a modern military historian suggests that Haig was an efficient and highly skilled soldier who did much to lead Britain to victory in the First World War. Is their sufficient evidence in sources A to H to support this interpretation? Us

Question 3 John Keegan, a modern military historian suggests that Haig was an 'efficient and highly skilled soldier who did much to lead Britain to victory in the First World War'. Is their sufficient evidence in sources A to H to support this interpretation? Use the sources and your own knowledge to explain your answer Source A is written by General Haig as a report of the battle of the Somme. Haig is writing to the prime minister of the time David Lloyd George and the rest of the political cabinet. Haig is being criticised about his tactics and thinks that if he shows confidence he won't loose his job. This source is very biased and just shows Haigs opinions and views of the outcome of the battle of the Somme it shows this by him not stating all the facts and not mentioning the bad points and even when he does mention a bad point he barely touches the subject and goes straight on to a good point. However Haig does mention one fact that the German losses were greater than the British even though not by much German casualties 500,000 British casualties 420,000. ...read more.

This shows that Haig is a bad leader and is embarrassed of the British army and is expecting heavy death counts. Secondly Haig is talking about how high the morale is and soldiers are saying 'they have never before been so instructed and informed of the nature of the operation before them' Haig shows his confidence and the confidence of his army by saying 'the men are in splendid spirits' however Haig may have been misinformed again because any soldier would be nervous and a bit scared the day before a battle. Lastly Haig talks about how the first attack of the battle and that it 'all went like clockwork' and that 'the Germans are surrendering freely' but if this was true then Britain would have gained more land so once again it seems Haig was misinformed. Source D is a piece of writing by historian Anthony Livesey it is very different from the other 3 because this one tries to talk about Haig in a fair way with good and bad points Anthony Livesly tells us that Haig was a good soldier and the only problems he had were in his character Haig was 'ambitious and had great self-confidence' which probably led to the failures at the Somme and Passchendaele. ...read more.

pro-Haig some are against Haig and some are very fair sources A, C and F are very pro-Haig A and C are written by Haig himself and source A is written by Haig to save his job from the prime minister who was very critical of Haig and source F is influenced by his family so obviously it is not going to be critical of him. However sources B and E are against Haig. Source B is drawn by an unknown artist and is very critical of Haig it says he is going to get all the British soldiers killed and source E is part of Lloyd George's memoirs and during the time of the war Lloyd George became very critical of Haig because he thought that his job would also be on the line because he gave Haig so many men. But sources D and G are very fair. Source D and G are written by historians to have no reason to be biased for or against Haig but the historian who wrote source G wants to be pro Haig but he makes it fair by adding Haig's bad points to his article ...read more.