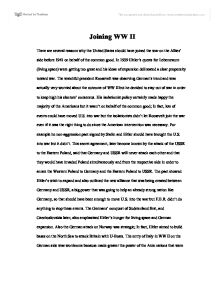 Joining WW II There are several reasons why the United States should have joined the war on the Allies' side before 1941 on behalf of the common good. In 1939 Hitler's quests for Lebensraum (living space) were getting too great and his ideas of expansion delineated a clear propensity toward war. The watchful president Roosevelt was observing German's trend and was actually very worried about the outcome of WW II but he decided to stay out of war in order to keep high his electors' consensus. His isolationist policy certainly made happy the majority of the Americans but it wasn't on behalf of the common good; In fact, lots of events could have moved U.S. ...read more.

The pact showed Hitler's wish to expand and also outlined the new alliance that was being created between Germany and USSR, a big power that was going to help an already strong nation like Germany, so that should have been enough to move U.S. into the war but F.D.R. didn't do anything to stop these events. The Germans' conquest of Sudetenland first, and Czechoslovakia later, also emphasized Hitler's hunger for living space and German expansion. Also the German attack on Norway was strategic; In fact, Hitler aimed to build bases on the North Sea to attack Britain with U-Boats. The entry of Italy in WW II on the German side was worrisome because made greater the power of the Axis nations that were becoming enormously stronger than the Allies. ...read more.

The control of Germany over France and the German attack on Britain showed the necessity of the American help to the Allies because Britain couldn't fight alone for too long. The Allies needed help but Roosevelt was looking for a scapegoat to join the war without being criticized by the isolationists. Roosevelt was extremely worried about the German expansion so tried to help the Allies providing supplies and weapons but it wasn't enough. The German U-Boats were sinking a large number of British ships while the aircrafts were bombing the major cities and the Royal air force's bases. Roosevelt had to do something even if Britain was fighting back really well. There was a plenty of reason to join the war before 1941 but F.D.R. didn't change his mind and stayed neutral until he found the scapegoat: the Japanese attack on Pearl Harbor. ...read more.