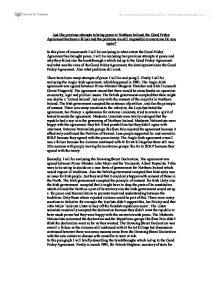 Just like previous attempts to bring peace to Northern Ireland, the Good Friday Agreement has been a failure and the problems are still impossible to overcome Do you agree?

Another aim was that the Irish Republic would end its claim to be the rightful government of Northern Ireland this is a short term aim. A new 'Northern Ireland Assembly' would take over control form Westminster of education, health, agriculture and Law-making, this would be a long term aim. Another aim of the Good Friday Agreement' was that the assembly would have 108 members appointed by proportional representation, to guarantee a full representation form all communities. This to would be a long term as it is linked with the last aim. The next is still linked with the assembly the aim is that the assembly would have ten separate ministries with their own committees. Both the ministers and the committees would be appointed according to party strength is a long aim because it is still talking about the 'Northern Ireland Assembly'. The next aim was that a 'Council of Isles' would be formed with representatives from Ireland, Northern Ireland, Scotland and Wales. Their role would be to act as a consultative body, this is a long term aim. The next aim was Human rights and equality would be guaranteed, this is a short term because this could be put into action straight away. Another aim of the 'Good Friday Agreement' was that al political prisoners would be released within two years if their associated paramilitary organisation maintained their ceasefire, this is a long term aim. Former Conservative MP, Chris Patten, a Catholic , would head a 'Policing Commission' to examine the future of the Royal Ulster Constabulary, this would have been a long term aim. ...read more.

In this paragraph I will be looking at the problem that still remains of RUC/ Police Force. On the 4.11.2001 was the first major developments of the RUC/ Police Force when the name of RUC changed to Police Service of Northern Ireland also as well for the very first time the police force in Northern Ireland had the backing of the Roman Catholic Church and the Nationalist SDLP. 50% of all new recruits must be Roman Catholics, Sinn Fein remained the only party refusing to endorse the service. On the 20.9.2003 Catholic members of Northern Ireland Police Force were sent death threats. Real IRA torch cars of Catholic police, two police resign due to intimidation. On the 28th January 2007 Sinn Fein announce that they will support the Police Force of Northern Ireland. And on the 31st of March 2009 More Catholics were joining the police in Northern Ireland despite being targets for the Real IRA and Continuity IRA, a cabinet minister revealed. Out of all the problems the Police force is most accomplished problem with more Catholics joining and standing up to The Real IRA and Continuity IRA. To conclude the good Friday agreement has been the most successful of any of the peace treaties and still holds today, therefore it is a success. However obviously there are still problems within Northern Ireland that I have mentioned but the are not necessarily impossible to overcome. A lot of work has been done since the good Friday agreement and some of the aims have not been met on time however within the climate of wanting peace there remains a rhetoric of discussion and a commitment to work out a positive future for Northern Ireland. ...read more.