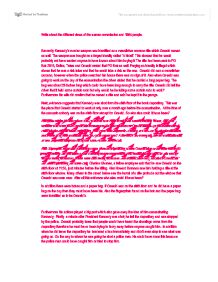 Write about the different views of the warren commission and 1964 people. Secondly Kennedy's murder weapon was identified as a mannlicher carcano rifle which Oswald owned as well. The weapon was bought on a forged identity called 'A hidell'. This showed that he would probably not have wanted anyone to have known about him buying it. The rifle had been sent to PO Box 2915, Dallas, Texas and Oswald rented that PO Box as well. Forging an identity is illegal which shows that he was a risk taker and that he would take a risk as the one. Oswald did own a mannlicher carcano, however when the police searched his house there was no sign of it. Also when Oswald was going to work on the day of the assassination the driver stated that he carried a long paper bag. The bag was about 28 inches long which could have been long enough to carry the rifle. Oswald did tell the driver that it held some curtain rods but why would he be taking some curtain rods to work? ...read more.

Charlse Givenes, a fellow employee said that he saw Oswald on the sixth floor at 11:55, just minutes before the killing. Also Howard Brennan saw him holding a rifle at the sixth floor window. Many others in the crowd below saw the barrel of a rifle protrude out the window that Oswald was seen near. After all this evidence who else could it have been? In addition there were boxes and a paper bag. If Oswald was on the sixth floor and he did have a paper bag on the day then they must have been his. Also the fingerprints found on the box and the paper bag were identified as to be Oswald's. Furthermore his actions played a big part which also gave away the idea of him assassinating Kennedy; Firstly a minute after President Kennedy was shot; he left the depository and was stopped by the police.. Oswald probably knew that people would have heard the shootings come from the depository therefore he must have been trying to hurry away before anyone caught him.. ...read more.

They also believed that four shots were fired and the third was from in front of the President. Furthermore they believe d that two people assassinated Kennedy by a conspiracy. One of the two they believed was Lee Harvey. These theories came from the zabruder film being investigated very carefully. Oswald must have been the assassin as the warren commission and the committee in 1979 believed that Oswald was involved and at least one of the assassins therefore Oswald must have shot Kennedy.Also it must have ben from the book depository as hey both agreed on that too. Furthermore Oswald had a reason why he wanted to murder jfk. He had frequent involvement with some communist countries and activities gave him a motive to kill Kennedy because he was a strong anti-communist which Oswald hated. To conclude I believe that Oswald was the person who assassinated John Kennedy. There is a lot of evidence suggesting it and many witnesses who believed they saw Oswald at the place where the shootings took place from. He had many reasons to do it and nobody had found any other suspects who murdered him as Oswald was clearly the assassin. ...read more.