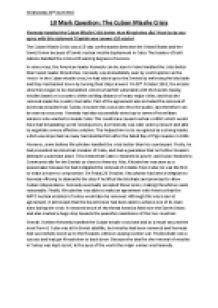 Kennedy handled the Cuban Missile Crisis better than Khrushchev did. How far do you agree with this statement? Explain your answer (10 marks)

Transfer-Encoding: chunked ﻿Wednesday 20th April 2016 10 Mark Question: The Cuban Missile Crisis ?Kennedy handled the Cuban Missile Crisis better than Khrushchev did.? How far do you agree with this statement? Explain your answer (10 marks) The Cuban Missile Crisis was a 13-day confrontation between the United States and the Soviet Union because of Soviet nuclear missile deployment in Cuba. The leaders of both nations handled the crisis with varying degrees of success. In some ways, the American leader Kennedy can be seen to have handled the crisis better than Soviet leader Khrushchev. Kennedy was immediately seen by world opinion as the ?victor? in the Cuban missile crisis; he had stood up to the Soviets by enforcing the blockade and they had backed down by turning their ships around. ...read more.

Kennedy had also successfully stood up to some of his military advisors who wanted to invade Cuba. This could have caused nuclear conflict which would have had devastating world consequences, but Kennedy was calm under pressure and able to negotiate a more effective solution. This helped him to be recognised as a strong leader, which was important as many had doubted him after the failed Bay of Pigs invasion in 1961. However, some believe Khrushchev handled the crisis better than his counterpart. Firstly, he had prevented an American invasion of Cuba, and had a guarantee that no further invasion attempts would take place. This meant that Castro remained in power, and Cuba remained a Communist ally for the Soviets so close to America. ...read more.

Although this was a secret agreement, it still meant that the Soviet Union had been able to achieve one of its main aims during the crisis. It removed much of the threat America held over the Soviet Union, and also marked a huge step towards the peaceful coexistence of the two countries. Overall, I believe Kennedy handled the Cuban missile crisis best and as a result secured the most from it. Cuba was still a Soviet satellite, but missiles had been removed and Kennedy had successfully stood up to the Russians without causing nuclear war. His blockade was a success and had got Khrushchev to back down. Because the deal for the removal of missiles in Turkey was kept secret, in the eyes of the world the major winner was Kennedy. https://i.ytimg.com/vi/UaTmYJJOy0M/maxresdefault.jpg ...read more.