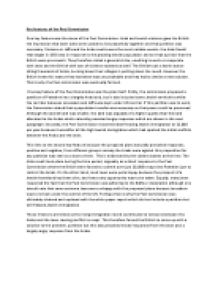 Key features of the Peel Commission in Palestine.

Transfer-Encoding: chunked ﻿Key features of the Peel Commission One key feature was the cause of the Peel Commission- Arab and Jewish violence gave the British the impression that both sides were unable to live peacefully together and that partition was necessary. Violence in Jaffa and the Arab revolts were the most notable events- the Arab Revolt that began in 1936 was in response to the growing Jewish population and an Arab opinion that the British were pro-Jewish. They therefore called a general strike, unwilling to work or cooperate with Jews and the British with acts of violence towards as well. The British took a harsh stance killing thousands of Arabs, burning down their villages in putting down the revolt. ...read more.

If this partition was to work, the Commission stated that a population transfer was necessary so that peace could be preserved. Although the Jewish land was smaller, the land was arguably of a higher quality than the land allocated to the Arabs which naturally provoked angry responses which are shown in the next paragraph. Secondly, the Peel Commission recommended freezing Jewish immigration at 12,000 per year because it was after all the high Jewish immigration which had sparked the initial conflicts between the Arabs and the Jews. This links to the second key feature because the proposed plans naturally provoked responses, positive and negative, from different groups: namely the Arabs were against this proposition for any partition was seen as a loss to them. ...read more.

Equally, many Jews respected the fact that the Peel Commission was adhering to the Balfour declaration although one should note that some extreme Jews were unhappy with the proposed plane because Jerusalem was to remain under the control of the UN. Perhaps that is why the Peel Commission was ultimately shelved and replaced with the white paper report which did not include a partition but still freezed Jewish immigration. These 3 factors are linked as the rising immigration levels contributed to tensions between the Arabs and the Jews causing conflict to erupt. This therefore forced the British to come up with a solution to the problem, partition but this also provoked mixed responses from the Jews and a largely angry response from the Arabs. ...read more.