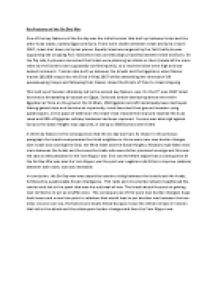 Transfer-Encoding: chunked ﻿Key Features of the Six Day War One of the key features of the Six day was the initial tension that built up between Israel and the other Arab states, namely Egypt and Syria. There were clashes between Israel and Syria in April 1967, Israel shot down six Syrian planes. Equally Israel was angered by the fact that Syria was supporting the on-going PLO raids which was contributing to hostility between Israel and Syria. On the flip side, Syria were convinced that Israel were planning an attack on them (made all the more tense by the Soviet Union supposedly confirming this), as a result tensions were high and war looked immanent. ...read more.

By 11:35am, 250 Egyptian aircraft had already been destroyed. Having gained clear and decisive air superiority, Israel launched their ground invasion using paratroopers, in the space of 100 hours the Israel?s had crossed the Sinai and reached the Suez canal and 85% of Egyptian military hardware had been captured. Success was also high against Syria as the Golan Heights was captured, in doing so 2500 Syrians were killed. A third key feature is the consequences that the six day war had. As shown in the previous paragraph the Israelis overpowered her Arab neighbours- there were now new border changes with Israeli now owning the Sinai, the West Bank and the Golan Heights. ...read more.

In conclusion, the Six Day war was caused by tensions rising between the Israelis and the Arabs, furthered by questionable Soviet intelligence. PLO raids and cross border attacks heightened the tension and led to the spark that was the outbreak of war. The Israeli attack focused on gaining new territories to act as a buffer zone. The consequences of this were new border changed, huge Arab losses and a new low point in relations that would lead to yet another war between the two sides. As once can see, the factors are clearly linked because it was the initial increase in tension that led to the attack and the subsequent border changes and then the Yom Kippur war. ...read more.