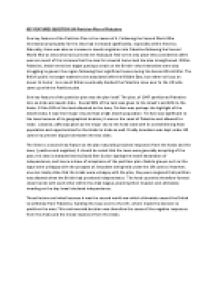 Transfer-Encoding: chunked ﻿KEY FEATURES QUESTION UN Partition Plan of Palestine One key feature of the Partition Plan is the causes of it. Following the Second World War international sympathy for the Jews had increased significantly, especially within America. Naturally, there was also an increase in Jewish migration into Palestine following the Second World War as Jews who had survived the Holocaust fled to the only place they considered safe-it was as a result of this increase that the case for a Jewish home land has also strengthened. Within Palestine, Jewish terrorism began putting a strain on the British- who themselves were also struggling to govern the region following their significant losses during the Second World War. ...read more.

The plan, of 1947 partitioned Palestine into an Arab and Jewish state. Overall 56% of the land was given to the Israeli?s and 46% to the Arabs. Of the 56% of the land allocated to the Jews, Tel-Aviv was perhaps the highlight of the Jewish state; it was their major city and had a high Jewish population. Tel Aviv was significant to the Jews because of its geographical location; it was on the coast of Palestine and allowed for trade. Likewise, Jaffa was given as the major city to the Arab state with its overwhelming Arab population and opportunities for the Arabs to trade as well. ...read more.

Radicle groups such as the Irgun were unhappy with the prospect of Jerusalem being held under the UN control. However, one can clearly state that the Arabs were unhappy with the plan, they were angered that partition was allowed when the British had promised independence. The Arab countries therefore formed closer bonds with each other within the Arab league, planning their invasion and ultimately invading on the day Israeli declared independence. These factors are linked because it was the second world war which ultimately caused the British to withdraw from Palestine, handing the issue over to the UN , whom made the decision to partition the area. This controversial decision was therefore the cause of the negative responses from the Arabs and the mixed reactions from the Arabs. ...read more.