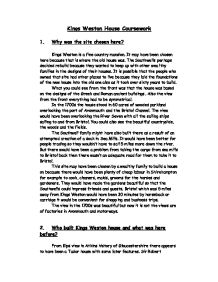 Kings Weston House Coursework 1. Why was the site chosen here? Kings Weston is a fine country mansion. It may have been chosen here because that is where the old house was. The Southwells perhaps decided rebuild because they wanted to keep up with other wealthy families in the designs of their houses. It is possible that the people who owned that site had other places to live because they laid the foundations of the new house into the old one also as it took over sixty years to build. What you could see from the front was that the house was based on the designs of the Greek and Roman ancient buildings. Also the view from the front everything had to be symmetrical. In the 1700s the house stood in 60 acres of wooded parkland overlooking the port of Avonmouth and the Bristol Channel. The view would have been overlooking the River Seven with all the sailing ships sailing to and from Bristol. You could also see the beautiful countryside, the woods and the fields. The Southwell family might have also built there as a result of an attempted creation of a dock in Sea Mills. ...read more.

All of the houses were symmetrical as Kings Weston is if viewed from a distance. The differences Kings Weston shows compared with Houghton Hall is that there is a Georgian statue on top of the triangular pediment which Kings Weston has not got. Castle Howard has wings stretching sideways from the entrance. King Weston's is just a smaller version of castle Howard's centre. Also Castle Howard has a dome above the entrance which Kings Weston has not. Blaise House has a portico which is held up by columns but Kings Weston is not held up by columns, it just has pilasters which are stuck to the wall. Kings Weston is the smallest house that Vanbrugh had ever worked on. It has been said that apart from the chimneys it looks like a cubic block. However Vanbrugh wanted the house to look simple, these great houses were designed primarily as ceremonial buildings. 5. What does kings Weston tell use about life and fashions in the eighteenth and nineteenth centuries? During the 17th and 18th centuries Britain's overseas trade grew quickly and by 1800 she had trading links with many parts of the world. Some of this trade was with her colonies such as India and West Indies. ...read more.

However in 1939 when the Second World War started the project was abandoned. From 1939-45 the house became a military hospital for wounded soldiers again there was a lot of damage done. Kings Weston was leased to Bristol Education Committee for use as a primary school. Then was sold to Bristol College of Science and Technology and became the Department of Architecture for Bath Universities. In 1971 it was taken over for a police training school. For somebody to actually live in Kings Weston House today would be very difficult and expensive. Even though the house was cheap to buy, the repairs would have been very expensive. As it was such a big house it would need a lot doing to it. Today the people who owned the house would need about four or maybe more maids to keep the house clean it would have also been very expensive in terms of bills the electricity, lighting, heating and cleaning would have been very expensive. The women of today would like a house that is more manageable as there are now more women in the work place. They would most likely want a regular sized house that is easy to keep clean. The house now belongs to James Harding he plans to put in offices and a restaurant. The house is also a ceremonial building where wedding receptions do take place. ...read more.