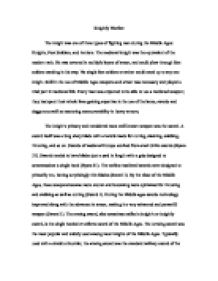 Knightly Warfare. The knights primary and considered most well known weapon was the sword.

Knightly Warfare The knight was one of three types of fighting men during the Middle Ages: Knights, Foot Soldiers, and Archers. The medieval knight was the equivalent of the modern tank. He was covered in multiple layers of armor, and could plow through foot solders standing in his way. No single foot solders or archer could stand up to any one knight. Skill in the use of Middle Ages weapons and armor was necessary and played a vital part in medieval life. Every man was expected to be able to use a medieval weapon; they had spent their whole lives gaining expertise in the use of the lance, swords and daggers as well as mastering maneuverability in heavy armors. The knight's primary and considered most well known weapon was the sword. A sword itself was a long sharp blade with a handle made for cutting, slashing, stabbing, thrusting, and so on. Swords of medieval Europe evolved from steel Celtic swords (Byam 31). Swords tended to have blades just a yard in length with a grip designed to accommodate a single hand (Byam 31). The earliest medieval swords were designed to primarily cut, having surprisingly thin blades (Sword 1). By the close of the Middle Ages, these weapons became more stouter and becoming more optimized for thrusting and stabbing as well as cutting (Sword 1). During the Middle ages swords technology improved along with the advances in armor, making it a very advanced and powerful weapon (Sword 1). The arming sword, also sometimes called a knight's or knightly sword, is the single handed cruciform sword of the Middle Ages. The Arming sword was the most popular and widely used among most knights of the Middle Ages. Typically used with a shield or buckler, the arming sword was the standard military sword of the knight. The arming sword was overall a light, versatile weapon capable of both cut and thrust combat; and normally boasts excellent balance. ...read more.

Medieval plate mail armor was a complex series of garments, chain mail and iron plate (Plate 2). It was highly important to keep the head and neck protected when doing dangerous activity, and this was especially true for medieval knights, who served as warriors for their kingdom (Plate 2). Each helmet had a visor that was detachable, and that was specialized to protect the eyes and face (Parts 1). In the 13th century, medieval knights' helmets were known as bassinets, and attached to the bottom of the helmets was a skirt that served as protection for the neck (Parts 1). There were four major pieces used to protect a knight's arms and hands (Parts 1). For the hands, a knight wore gauntlets (Parts 1). Gauntlets consisted of ringed metal plates that protected the fingers (Parts 1). The piece of armor used to protect the lower arm was known as the vambrace (Parts 1). For the upper arm and shoulder, a knight wore a rerebrace, and the armpit was protected by the attached besagues (Parts 1). Besagues were round shield-like pieces attached to the shoulder pieces of the armor (Parts 2). Body armor consisted of tough metal pieces to protect the chest, upper and lower back, hips and abdomen (Parts 2). The large piece of armor defending the chest was known as the breast plate (Parts 2). Protecting the upper back was a piece known as the backplate (Parts 2). For the lower back, hips and abdomen, there was a ring of armor known as a fauld (Parts 2). Faulds were attached to the bottom of the large breast plate and completely encircled the lower torso (Parts 2). Knights wore sabatons on their feet, which were boots that consisted of riveted iron plates (Parts 2). Spurs were attached to the heel of the sabatons so the knight could command his horse during battle (Parts 2). ...read more.

For knights trained and mastered in the art of the long sword, the weapon was prized for its versatility and killing capability (Med. Weapons 2). Since knights could not also wield a shield along with a long sword, it was expected that most knights trained in using the weapon offensively, but also include defensive techniques to their fighting style (Byam 32). For instance, a knight well trained in using a long sword would learn to be able to block by holding the handle with one hand while placing the other hand on the flat portion of the blade (Nardo 40). This technique utilizes the heavier, wider blade as a small shield to parry or block an opponent's swings for a short instance (Nardo 40). Also, when knights exerted force on the blade with the hand during this blocking technique, it allowed the knight a chance to throw his opponent off balance; then swiftly moving his "blocking hand" back to the handle for an offensive counter (Nardo 40). Since long swords were much heavier than short swords it took longer to regain posture in time for a defensive position against a counter attack (Nardo 40). Executing such techniques in rapid succession required constant training and practice among knights (Nardo 40). Medieval Knights were the most powerful and feared on the battlefield. Knights came to be exceptional warriors mastered in the usage of a wide range of weapons from close combat weapons like the sword to long combat weapons like the pole arm. Knights were equipped in various plates of armor making them almost unstoppable forces against regular enemies. As tactics and strategies evolved throughout the Middle Ages, so did the knight; excelling in fierce and swift combat strategies and techniques for most situations. Knights spent their whole lives gaining expertise in the use of the lance, swords and daggers as well as mastering maneuverability in heavy armors. The Medieval Knight was the most feared on the battlefield and highly respected in social stature; no other class of warriors could dare compare. ...read more.