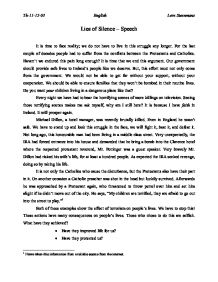 Lies of Silence - Speech It is time to face reality; we do not have to live in this struggle any longer. For the last couple of decades people had to suffer from the conflicts between the Protestants and Catholics. Haven't we endured this pain long enough? It is time that we end this argument. Our government should provide safe lives to Ireland's people like we deserve. But, this effort must not only come from the government. We would not be able to get far without your support, without your cooperation. We should be able to ensure families that they won't be bombed in their routine lives. ...read more.

Not long ago, this honourable man had been living in a middle class street. Very unexpectedly, the IRA had forced entrance into his house and demanded that he bring a b**b into the Clarence hotel where the respected protestant reverend, Mr. Pottinger was a guest speaker. Very bravely Mr. Dillon had risked his wife's life, for at least a hundred people. As expected the IRA seeked revenge, doing so by taking his life. It is not only the Catholics who cause the disturbance, but the Protestants also have their part in it. On another occasion a Catholic preacher was shot in the head but luckily survived. ...read more.

* Have they protected us? My answer is no. They have only worsened my life, they have not made me feel safer. They have however achieved the feeling of danger and of carefulness. Was this their aim? They have done everything except contribute to the peace we all want. We must stop this. No one wishes death to be brought to them or their family. People all over the world live with religious differences. Home Rule or English rule, we both want PEACE. Isn't that what matters? That we can live in a peaceful country, side by side? Taking the examples into mind and all other people who have suffered do you not want to end this struggle right now and live in peace? 1 I have taken this information from a reliable source from the internet. Th-11-12-03 English Lore Steenmans ...read more.