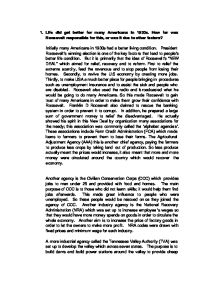 Life did get better for many Americans in 1930s. How far was Roosevelt responsible for this, or was it due to other factors?

1. Life did get better for many Americans in 1930s. How far was Roosevelt responsible for this, or was it due to other factors? Initially many Americans in 1930s had a better living condition. President Roosevelt's winning election is one of the key factors that lead to people's better life condition. But it is primarily that the idea of Roosevelt's "NEW DEAL" which aimed for relief, recovery and to reform. First to relief the extreme scarcity, feed the ravenous and to stop people from losing their homes. Secondly, to revive the U.S economy by creating more jobs. Thirdly, to make USA a much better place for people bringing in procedures such as unemployment insurance and to assist the sick and people who are disabled. ...read more.

He actually showed his spirit in this New Deal by organization many associations for the needy; this association was commonly called the 'alphabet agencies'. These associations include Farm Credit Administration (FCA) which made loans to farmers to prevent them to lose their farms. The Agricultural Adjustment Agency (AAA) this is another chief agency, paying the farmers to produce less crops by taking land out of production. So less produce actually meant the prices would increase, it also meant that more and more money were circulated around the country which would recover the economy. Another agency is the Civilian Conservation Corps (CCC) which provides jobs to men under 25 and provided with food and homes. ...read more.

NRA codes were drawn with fixed prices and minimum wage for each industry. A more industrial agency called the Tennessee Valley Authority (TVA) was set up to develop the valley which across seven states. The purpose is to build dams and build power stations around the valley to provide cheap electricity for the local farmer to revive the industry and agriculture of this particular undeveloped place. In fact, this agency was considered the most successful ones in the alphabet agency. These are the key factors of how Roosevelt made America to a better standard of living by proposing the idea of 'New Deal'. Although some Americans may oppose to the 'New Deal' because of the amount of government money put in to recover the economy, but this is primarily the most effective way to make the living conditions of Americans better. ?? ?? ?? ?? ...read more.