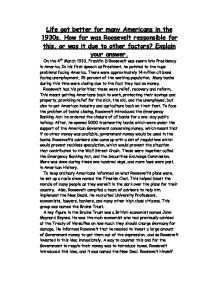 Life got better for many Americans in the 1930s. How far was Roosevelt responsible for this, or was it due to other factors? Explain your

Life got better for many Americans in the 1930s. How far was Roosevelt responsible for this, or was it due to other factors? Explain your answer. On the 4th March 1933, Franklin D Roosevelt was sworn into Presidency in America. In his first speech as President, he pointed to the huge problems facing America. There were approximately 14 million citizens facing unemployment, 25 percent of the working population. Many banks during this time were closing due to the fact they had no money. Roosevelt had his priorities; these were relief, recovery and reform. This meant getting Americans back to work, protecting their savings and property, providing relief for the sick, the old, and the unemployed, but also to get American industry and agriculture back on their feet. To face the problem of banks closing, Roosevelt introduced the Emergency Banking Act: he ordered the closure of all banks for a one-day public holiday. After, he opened 5000 trustworthy banks which were under the support of the American Government concerning money, which meant that if no other money was available, government money would be used in the banks. ...read more.

They spend huge sums of money on public work schemes to get the unemployed back to work. The National Industrial Recovery Act (NIRA) setup the National Recovery Administration (NRA). The NRA tackled two problems- how to get people back to work, and how to stop civil war breaking out between workers and their employees. The NIRA also set up the Public Works Administration (PWA) which ran schemes along the same lines as the CWA and CCC. Furthermore, the National Industrial Recovery act created the work union, where people could stand up for workers' rights. The Public Works Administration (PWA) ran large- scale projects such as building dams, bridges and highways. The Civil Works Administration (CWA) put four million people to work in the first thirty days of its existence. In less than four months, the CWA inaugurated one hundred and eighty thousand works projects and spent over nine hundred and thirty three million dollars. Even though the New Deal was a part success, it was not fully. Many people complained it interfered with them. Businessmen complained it interfered with their freedom and the rich wanted to see the results for all the extra taxes paid. ...read more.

World War Two hard started in September 1939 as Poland had been invaded by Germany. To start with, America did not participate in the war, although they did supply equipment to Europe. This was under the 'Lend- Lease' scheme which was created in the early 1940s. America would lend supplies to Britain for a fee, although they would need the artillery back. If any items were damaged, then fees would be paid to cover the cost. America's industry started to stimulate from there-on. In December 1941, America joined the war. The Japanese had attacked Pearl Harbour and so the Americans fought back. This meant that jobs were available for women. Nearly everyone was working during WWII and between 1939 and 1945, US industrial production had doubled. Overall, there were many factors that contributed to the good life of many Americans returning in the 1930s, and some of it was Roosevelt's. Although there were other factors, and certainly other people contributing: John Maynard Keynes created the idea of a new deal, and Harry Hopkins created some of the Alphabet Agencies. Along with Roosevelt, these became quite successful. But the factor that helped America the most was the Second World War as it had everyone working and producing; after life became a lot better for Americans. ...read more.